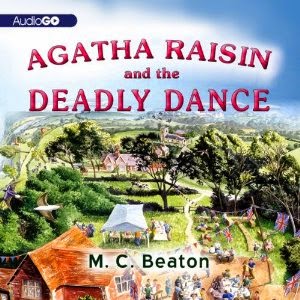 Agatha Raisin, amateur sleuth extraordinaire, has decided to start up her own detective agency. At first things are slow going with lost cats. However soon she hires her new neighbour, Emma Comfrey, as her secretary and her friend, Sir Charles, refers a case to her. A Mrs Laggart-Brown wants her to investigate the death threats her daughter has received. As Agatha and her detectives investigate they discover a tangle of relationships and murder, as they try to get to the bottom of it.

I’m smitten with Agatha Raisin. She’s sassy, funny and I love that she is now a detective – officially! Cozy mystery series with their amateur detectives poking their nose into things can sometimes get very long-winded, so it’s refreshing to see a series that has gone from amateur to official detective and thus gives Agatha a reason to poke her nose into things!!

I enjoyed the mystery a lot, but perhaps what I enjoyed more was Sir Charles Fraith being around, and James Lacey not. James Lacey is Agatha’s ex-husband, who went off to be a monk and then disappeared. He’s barely even mentioned in Agatha Raisin and the Deadly Dance and as I’m firmly on Team Charles I was completely fine with this! I have a feeling that M.C. Beaton will be making him pop up sooner or later though.

Penelope Keith is the voice of Agatha Raisin for me. I really enjoyed Penelope’s acting career, being such a big fan of british tv, and I’m glad she’s voicing these audiobooks. I love the voices she provides, especially the caring tones she puts in her voice for Mrs Bloxby, who is perhaps Agatha’s greatest friend. I hope Penelope Keith continues to provide the voice for these audiobooks for many years to come, because both Penelope and Agatha herself are the reason I keep coming back to listen to more.

Purchase Agatha Raisin and the Deadly Dance by M.C. Beaton at Audible, Amazon.
Posted by Anna at 09:31