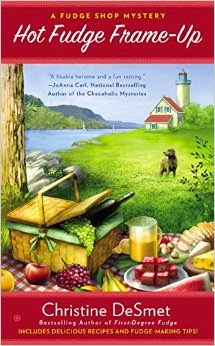 Ava Oosterling is settling back into Door County, Wisconsin, selling fudge and creating new mouthwatering flavours. She's also gearing up for the first ever Fudge Festival. Along with two other cooks she will be trying to out-fudge them with the best tasting fudge ever! However when one of the judges winds up dead, it looks like they have a murder in their midst.

I quite enjoyed the first book in this series, First-Degree Fudge. It set the scene nicely with Ava and her grandfather running a combination fudge and bait shop, and I fell in love with this beautiful area in Wisconsin. I was more than happy to take another delicious journey with Ava.

I liked the character development that Christine DeSmet has added in this second instalment. We met all the characters in First Degree Fudge, and now after reading Hot Fudge Frame-Up I feel like I know them like neighbours. I especially like how we learn more about the special friendship between Ava and her grandfather. It might sound weird having a fudge-and-bait combo shop, but with the special friendship between Ava and her grandfather that simply shines off the pages, it's not weird at all.

The mystery kept me on the edge of my seat, as I tried to unravel the clues laid out and figure out who killed Lloyd. More importantly Lloyd was involved in real estate deals, one of which that could mean the end of Ava's shop. It was interesting watching this all unravel, and I spent much time trying to figure out the mystery.
With captivating characters and a suspenseful mystery, Hot Fudge Frame-Up was a thoroughly enjoyable read. I can't wait to see what Christine DeSmet has in store for us next. In the meantime, with the mouth-watering recipes at the back of Hot Fudge Frame-Up I will be eagerly heading into the kitchen with this book in hand to try them out.
Posted by Anna at 10:29