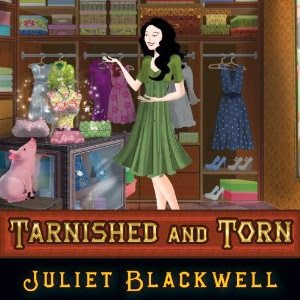 Lily Ivory is a witch and owner of a vintage store called Aunt Cora’s Closet. In her time in San Francisco she’s gotten into plenty of trouble. However trouble is heading her way like never before. This time in the form of her father and what could likely be a fire demon!! It all starts innocently enough when she goes to a fair and meets a German lady selling antique jewellery. She’s interested in what she has to offer and suspects that she might also be a witch. Her suspicions are confirmed when the lady turns up dead, pressed between wood with cinder blocks on top. The “pressing” is a old form of torture against witches, which Lily has only heard of. Due to the nature of her death, Detective Carlos calls on Lily to help out and this starts one adventure that Lily nor her friends will forget in a hurry.

I fell in love with this series when I first read Secondhand Spirits. I love Lily as she not just tries to solve mysteries, but also learns what it is like to live in San Francisco and have friends nearby. She was shunned from her own mother and her hometown for being a witch. However her life in San Francisco is pretty great… well except for the murders and the fact that her one-time lover, Sailor, has disappeared.

What I love the most about Tarnished and Torn and this series as a whole, is it is never dull and boring. There is always a lot happening but Juliet Blackwell doesn’t leave readers lost and unable to connect the dots. It is more than just a cozy mystery, with the paranormal elements and more-than-meets-the-eye characters. In Tarnished and Torn we finally meet Lily’s father, who abandoned her as a baby. We discover more about their relationship (or lack there of) and perhaps more about how Aidan feels about Lily. Fans of this series will definitely enjoy some of the sub-plots that have continued on from the previous books.

For me, Xe Sands is the voice of this series. Her portrayal of the characters is beyond amazing. I particularly love the depth she gives to Lily’s familiar, Oscar. Oscar is part gargoyle, part goblin and appears a pot-bellied pig. His suggestion on how to solve the case was to hire Miss Marple, and is aghast to find out that she doesn’t exist and is made up! This scene alone had my laughing until I cried!! After having experienced the previous books as audiobooks I know I will definitely be continuing on with the series in audiobook format only. I wouldn’t hesitate recommend this series to mystery fans and also paranormal fans. It’s not one to be missed!

Check out Tarnished & Torn by Juliet Blackwell on Audible, Amazon.

Listen to a Sample of Tarnished & Torn by Juliet Blackwell, narrated by Xe Sands:
Posted by Anna at 09:55