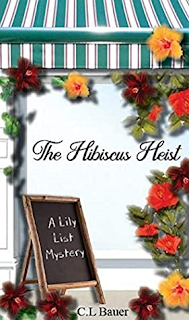 Florist Lily Schmidt just may be in love with the handsome DEA agent who walked into her shop one normal day. But since he entered her life, nothing has ever been the same. She's not even using as many post-it notes to keep her life organized. Chaos and danger are becoming a normal part of her day. Now her car has been stolen. Someone is stalking her. What next? Devlin Pierce is always following the evidence to take down the bad guys. But since he met Lily, he's actually making lists and thinking about his future. The Kansas City florist may just be the one. His heart keeps telling him his life as he knows it may have to change. The Hibiscus Heist is the second adventure in The Lily List Mystery Series. It's not easy for Lily and Devlin to ever get together, but this time, one wrong step could separate them forever. Will Lily's world ever be normal again? She will soon discover that normal is highly overrated.  (Summary via Goodreads)
The Lily List Mystery series by C.L. Bauer is a unique cozy mystery series.  If you read the first book, The Poppy Drop, you know what I am talking about.  However if you haven't that is okay, if you read The Hibiscus Heist you will not be lost at all.
In the second book, The Hibiscus Heist, the focus isn't on dead bodies or murder, it is about drugs and finishing something that was started in the first book.....
Lily List is the main character in this series.  Lily owns and runs Lily's Flower Shop, a family business that has been in Kansas City, Missouri since the early 1900's.  Lily has a very faithful employee, Abby, and between the two of them, they make and supply floral arrangements for a lot of weddings throughout the area.  Lily also has a kinda boyfriend that she met when she was involved with a drug drop that was delivered to her shop by accident.  Because of that she met DEA Devlin Pierce and they now have a long distant and complicated relationship.
In The Hibiscus Heist Lily and Abby are doing their thing with flowers, Devlin is away doing his thing and then Lily's car is stolen and things go downhill from there.  It seems that the bad guys are back and poking a stick at Lily.  Unfortunately Dev is deep undercover in the drug world in Miami and can't be there for Lily.....but that doesn't stop Lily from wanting to stop looking over her shoulder and regain her life back !!
Readers will enjoy the Lily List Mystery series as it is a lot different from normal cozy mysteries and has a bit more in the romance category...but not overly romantic.  This series actually adds comedy into the mix as well.  Readers will fall instantly for Lily and her life.  You will enjoy getting to know her, Abby, Devlin and in this book you get to see more of Devlin and his life and family.
I highly recommend grabbing your copies of the books in this series and getting lost with Lily and Devlin for a while....you'll enjoy it for sure !!!
Review by Missi M.
Posted by Cozy Mystery Book Reviews at 07:23