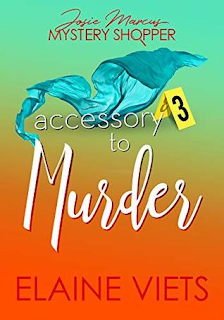 A secret shopper turns amateur sleuth when her best friend’s husband is accused of murder in this mystery by the Anthony and Agatha Award–winning author.Josie Marcus has an eye for the finer things in life. Unfortunately, her wallet can’t keep up—as a single mom and mystery shopper, she won’t be moving out of St. Louis’s suburbs anytime soon. Good thing her best friend, Alyce Bohannon, doesn’t mind sharing a taste of the high life in her posh gated community, Wood Winds. But the refined neighborhood turns ugly with gossip when Alyce’s neighbor, the well-heeled scarf designer Halley Hardwicke, is murdered.Talk is cheap . . . until the detectives begin questioning Alyce’s husband, Jake, about the crime. So Josie decides to do a little sleuthing of her own, going undercover to unravel the secrets of the cliquey Wood Winds wives. Hopefully she can clear Jake’s name and uncover the truth before the killer snags another victim.  (Summary via Goodreads)
I am a HUGE fan of Elaine Viets and her books and I am obsessed with her Josie Marcus, Mystery Shopper series.  As soon as I open one of these books up I feel like I am right there in Josie's world !!
Accessory to Murder is the third book in this series and I think this is my favorite ....so far.  In this book the murder hits close to home....not Josie's home but her best friend Alyce's home.  A neighbor of Alyce's in her fancy, gated, rich neighborhood is carjacked at a mall and Alyce's husband Jake is arrested for the murder !
Alyce begs Josie to help clear her husband and find the real murderer.  Even though Josie has a lot on her plate being a single mom to her daughter Amelia, dealing with her overpowering mother who lives upstairs, working as a mystery shopper and getting bad places to shop after pissing her boss off, she cannot say no to her best friend.  So she agrees to talk to some of the neighbors and look into Halley's death.  Unfortunately she quickly learns that not everyone is Alyce's friend and everyone thinks that Jake was having an affair with Halley and killed her.  Alyce insists that Jake is innocent and stands by her man.....now Josie has to do everything in her power to help.....
Viets is amazing at telling the reader a captivating story.  You cannot help but feel like you are right there along side Josie wherever she goes.  You will feel the homey bland feel to Josie's house and love the feeling you get when you are sitting in Alyce's kitchen.  And when Josie is out working you will feel her anguish when she's eating the crappy fast food that Harry makes her rate.  And readers will also enjoy reading about Josie and her disasterous dating experiences....however, in Accessory to Murder she may have finally found a keeper, she just has to convince her mom he's a catch and not to throw him back.
There is so much to love with this series you won't be sorry.  The only thing you will be sorry for is when you get to the end of the book and you have to go grab the next one in the series......
Review by Missi M.