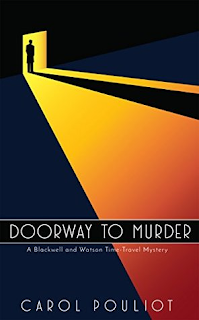 In a small New York town, secrets lurk and betrayal is just around the corner. The morning after the worst blizzard of 1934, Detective Steven Blackwell takes on a highly charged murder case. The investigation starts badly: one clue, lots of lies and alibis. To make things worse, Steven is seeing visions of a woman in his house. One night, she speaks. Her name is Olivia Watson and she lives in 2014. She believes time has folded over in the house they share. As their relationship deepens, Steven’s investigation intensifies. Soon he can no longer trust anyone in his own time. Can Olivia help crack the case—and catch a killer? The past collides with the present in DOORWAY TO MURDER, an exciting new mystery by debut author Carol Pouliot. With its fresh premise covering two eras that crackle off the page, Carol Pouliot introduces compelling characters to lead her series forward. Add a sharply written mystery with clever plot twists, and you have all the elements that make DOORWAY TO MURDER an accomplished debut. Marni Graff, award-winning mystery author of Death Unscripted Mystery. Romance. Time-travel adventure. DOORWAY TO MURDER is the total package. Carol Pouliot interweaves the past and present as easily as I turned the pages. I highly recommend this fun read. Betsy Bitner, award-winning humor columnist, Times Union (Albany, NY) There's nothing I like more than a time-travel tale, but how much better to get a crisp, fair-play police procedural, too. The atmosphere grabbed me. The ending surprised me. I'm already looking forward to Steven and Olivia's next adventure. Catriona McPherson, multi-award-winning author of the Edgar-shortlisted The Day She Died Steven and Olivia make a great couple of crime busters in this era-jumping romance and hard-boiled police procedural. Join them. You’ll be glad you did! Steve Axelrod, author of the Henry Kennis Nantucket mysteries .  (Summary via Goodreads)
WOW !!!  That is the first word you are going to say after reading Doorway to Murder by Carol Pouliot.  There will be plenty more that will follow it but WOW is the best first word you will say !!
Doorway to Murder is a very captivating story that you will have a hard time putting down.  Once you start reading it you are not going to want to stop.  You will fall instantly in love with the storyline and characters and you will enjoy following the main characters as they travel from 1934 to the present time.....
In Doorway to Murder readers will meet Olivia Watson as she goes about her life in the present time which is 2014.  We hang out with her and her two close friends, Liz and Sophie, and her neighbor Isabel who use to be one of her school teachers.  Olivia has her own business, The Watson Agency, where she does research for people.  She has a cat, Mr. Moto, and she lives alone......until one night she wakes up and sees a strange man standing in the hallway looking into her bedroom.  Little does she know that the stranger is actually Detective Sergeant Steven Blackwell and he also lives in the house but the year for him is 1934 !!  After a few nights of seeing each other across the doorway, they decide to try talking to each other and when that works, they find out that they can cross over into each others time periods.  When Steven crosses over to Olivia's time, he is in her house with everything as it would be in that time period and when Olivia crosses over into Steven's timeline, she is in the year 1934 and around everything as it is in his time period.
As the two get to know each other Steven tells Olivia about the case that he is currently working on involving the murder of Leo Castleman, the bank manager of the First National Bank of Trust Company.  Even though Olivia can just go on the computer and search for the murder and find out who the killer is, Steven will not allow it.  He is a by the books police officer and knows that by doing his job, he will find the murderer and solve the case.
There is a lot to enjoy with Doorway to Murder !!  Just reading about Olivia's life or Steven's life is exciting enough but when the two cross over and talk about the differences between things in their times, it adds to the story and when there is a murder to solve, even one back in 1934, it is interesting to see how it gets solved.....and the ending of the story will shock readers and you will want to go and grab the second book, Threshold of Deceit, to see what happens next !!
I highly encourage readers to read this series.  There is so much to get lost in and enjoy, you will thoroughly enjoy the escape and luck for you, you do not have to cross over into different time periods. You can just sit in your comfy chair and read.......
Review by Missi M.