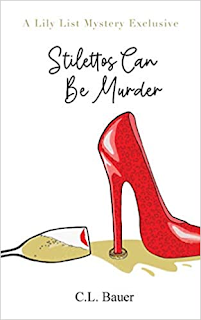 "Holy Moly indeed," Gretchen repeated. "Who would want to frame me for murder? I can't think of anyone who doesn't like me."

Abby drank the remainder of the liquid in her glass. She crossed her eyes. "Don't you? You can be a bit too much."

Gretchen pursed her lips as though she was ready to unload on her young friend. Instead, she laughed as she looked down at Abby. "Well, what's the point of living if you are just okay? There is never too much...too much excitement, adventure, money, or of me!"

You're never too old to fall in love or to be framed for murder! Gretchen Malloy, the fifty-something (she's not telling) elite Kansas City event planner stumbles over a dead groom on his wedding day. The police suspect the fashionable Ms. Malloy may be a murderer. She suspects the police don't appreciate her flair for the dramatic or her good taste for the better things in life. One detective knows she's not guilty, but desperately wishes he could charge the woman who gives him a headache anytime she's near.

In a race to save her business and her life, Gretchen becomes an investigator determined to discover who is framing her. Surely it isn't her former love who just happens to arrive in town at the same time? Her friend launching a political career wouldn't want her in prison, would he? Would his new wife take some sort of weird revenge on her? And would the detective throw her in the clink just because of her big hair and amazing high heels?

Gretchen Malloy, supreme snoop and who usually knows everything about everyone, is in the search of her life. She's left wondering...she may not be the only one in town with killer heels.

This Exclusive features characters from The Lily List Mysteries. Gretchen Malloy first appeared in The Poppy Drop as the ever-irritating wedding planner. High heels were her signature as she joined forces with Lily Schmidt as amateur sleuths. Cozy mysteries may never be the same with Gretchen around!  (Summary via Amazon)

Stilettos Can Be Murder by C.L. Bauer is a Lily List Mystery series Exclusive...it is an extension of the series in that it centered around a character from the Lily List series, Gretchen Malloy.  Gretchen is THE event planner for the Kansas City area.  She has worked on numerous events with Lily and Lily's assistant Abby.  They started off with Lily and Abby not liking Gretchen at all but with time they became to like her and they became close friends.  However in Stilettos Can Be Murder Gretchen is on her own......

Right before a very important wedding is about the begin, Gretchen goes in to check on the groom only to find him dead...with puncture marks on his neck from a stiletto.....and when the grooms parents walk in and find Gretchen next to the body, everyone assumes she did it ....even the police !!

To save her reputation and her business Gretchen vows to find the real killer and clear her name.  But everytime she gets one step ahead, the police detective sets her back two.

While Gretchen works on proving her innocence she is also helping her dear old friend Marty as he is going to announce that he is running for Senate.  Gretchen is working on the announcement party but doesn't realize how close she is to the real killer.....until it is almost too late !!!

If you are a fan of the Lily List Mystery series, you will love this exclusive story as well.  Readers will love getting to know Gretchen better and even though she is larger than life, you will fall in love with her.  You will love how Bauer brings Gretchen's past into her present life and the explosive relationships will have readers breathless.  I look forward to more stories involving Gretchen.....you know she will get into more trouble down the road but this time she will have one, or two, men on her side !!