It Takes Two to Mango (Trouble in Paradise! #1) by Carrie Doyle 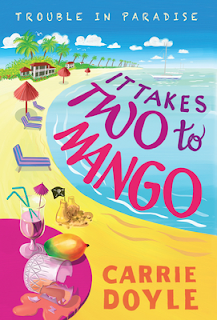 It's all fun in the sun until someone turns up deadAfter Plum Lockhart's job as a travel magazine editor is eliminated in corporate cuts, she decides she's sick of cold winters in NYC and fruitless swiping on dating apps—what she needs is a dramatic change of scenery. On a whim, she accepts a job as a villa broker and moves to a beautiful Caribbean island.

However, paradise isn't as perfect as it seems: the slow pace of island life, the language barrier, and a cutthroat office rival make Plum question leaving her old life behind. But when a client is found dead in the jacuzzi of Casa Mango—a property Plum manages—she knows she's really in a jam. With a killer loose on the island Plum will have to deal with a stonewalling police chief, a string of baffling clues, and a handsome Director of Security to solve this deadly case!   (Summary via Goodreads)
What do you do when life hands you lemons ?? You make lemonade....or in Plum Lockhart's case, you make mango salsa !!  Plum Lockhart is the main character in the Trouble in Paradise Mystery series by Carrie Doyle and her debut It Takes Two to Mango is a real TREAT for readers !!
It Takes Two to Mango sets the stage beautifully for readers.  It begins with Plum Lockhart living in New York City getting let go from her job working for a travel magazine.  The only job she can get is to be a villa broker on the Caribbean island of Paraiso working at the Jonathan Mayhew Caribbean Escapes.  So she packs up her place in New York City in the dead of winter and moves to Paradise.  Unfortunately she does not get along with her one co-worker, Damian, her boss isn't happy with her work performance and she rents out a villa to a bachelor party that her boss forbid her from doing.  Thinking nothing else could go wrong, she has a night of drinking where she meets the Director of Security Juan Kevin and makes a fool of herself.  But when a member of the bachelor party ends up dead and Plum convinces the police that it was murder, she has to team up with Juan Kevin to solve the murder and keep her job.
Plum is not use to "island time" and how slow everything is handled and the list of suspects keeps growing however, the suspects are either keeping things from her and Juan Kevin or refusing to even answer questions.  Plum is determined to get to the bottom of the murder but when she is threatened, she begins to think moving back to the city is the best choice for her......
Readers will fall in love with It Takes Two to Mango immediately !!  The storyline is captivating as well as the setting.  You will feel like you are riding along with Plum in the slow golf cart enjoying the scenery and smelling the fresh sea air and all the flowers.  The cast of characters are a unique group of people and the way that Doyle includes people from Plum's past and her present lives is orchestrated so well.  Even though there are some characters in the book that cannot wait to get on a plane and leave the island, you will want to stay as long as you can.  And the way that Doyle ends the story, don't rush to the end to see what I'm talking about, will have all readers looking forward to the next book for sure !!!!
Review by Missi M.