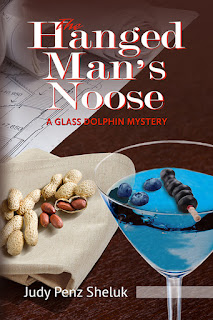 Today we are featuring new author, Judy Penz Sheluk. Judy is the author the Hanged Man's Noose, the first book in the Glass Dolphin Mysteries.

Journalist Emily Garland lands a plum assignment as the editor of a niche magazine based in Lount’s Landing, a small town named after a colorful 19th century Canadian traitor. As she interviews the local business owners for the magazine, Emily quickly learns that many people are unhappy with real estate mogul Garrett Stonehaven’s plans to convert an old schoolhouse into a mega-box store. At the top of that list is Arabella Carpenter, the outspoken owner of an antiques shop, who will do just about anything to preserve the integrity of the town’s historic Main Street.

But Arabella is not alone in her opposition. Before long, a vocal dissenter at a town hall meeting about the proposed project dies. A few days later, another body is discovered, and although both deaths are ruled accidental, Emily’s journalistic suspicions are aroused.

Putting her reporting skills to the ultimate test, Emily teams up with Arabella to discover the truth behind Stonehaven’s latest scheme before the murderer strikes again.

We're giving away one KINDLE COPY of Hanged Man's Noose.


GIVEAWAY
To enter:
1. Comment below.
2. Giveaway is open international.
3. Giveaway ends on August 12, 2015 at midnight and the winners will be contacted by email.
Posted by Anna at 05:29