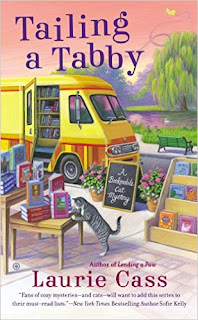 In the bookmobile, librarian Minnie Hamilton and her rescue cat, Eddie, roll out great summer reads to folks all over the lake town of Chilson, Michigan. And when real-life drama turns deadly, Minnie makes sure justice is never overdue.

The bookmobile is making its usual rounds when Minnie and Eddie are flagged down by a woman in distress. The woman’s husband, a famous artist, needs emergency medical care. After getting him into the bookmobile, Minnie races the man to the hospital in time…but his bad luck has only just begun.

After disappearing from the hospital, the artist is discovered slumped over the body of a murdered woman. Minnie knows that her new friend didn’t commit the crime, but the evidence paints an unflattering picture. Now this librarian and her furry friend have to put the investigation in high gear and catch the real killer before someone else checks out.[summary from Amazon]

Books, a cat, living on a houseboat, dating a gorgeous doctor, a best friend who owns a fabulous restaurant, driving a bookmobile around town, new interesting friends.... What more could Minnie Hamilton ask for ? A murder to which a newly acquired friend is the top suspect ? Deep down Minnie knows that Russell "Cabe" McCabe, infamous artist could not have murdered Carissa Randle. Not only was Carissa a fan of Cabe's but Cabe was recovering from a recent stroke leaving him weak and physically unable to have performed the act.

As Minnie gets deeper and deeper into the case, talking everything over with Eddie who understands her completely and even responses, she finds it hard to believe any of the people she meets who were involved with Carissa could have wanted her dead. But she has to figure it out because she needs to help Cabe and his wife Barb.

Ride along with Minnie and her cat Eddie as she roams around town trying to bring justice to her new friend and save his paintings from losing their value. Just be careful not to rock the boat too much.