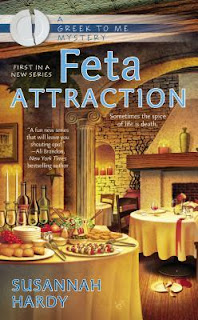 Georgie Nikolopatos manages the Bonaparte House, a Greek restaurant and historic landmark in beautiful upstate New York rumored to possess ghosts and hidden treasure. But when her husband disappears and her main competitor is found dead, it’s up to Georgie to solve a big fat Greek murder.

With her husband, Spiro, inexplicably gone for days, Georgie has her hands full running the restaurant and dealing with the crew of the TV show Ghost Squad, called in by Spiro to inspect the house for haunting. So when she has a chance to take a boating excursion on the St. Lawrence River with her friend Keith Morgan, she jumps on it. But their idyll is quickly ruined when they discover the body of rival restaurant owner Domenic “Big Dom” DiTomasso floating in the water.

When the police start asking questions, it doesn’t help that Spiro can’t be found—and with Georgie on their suspect list, it’s up to her to find her missing husband and find out who killed Big Dom before someone else’s order is up.[via Goodreads]

How can you not get intrigued when the first sentence of a book say this "When you marry a gay man, it shouldnt come as a suprise when he leaves you." That has got to make you want to continue reading. Well it did for me and it worked. I was intrigued during the entire book.

Georgie, part owner of a Greek restaurant called The Bonaparte House, with her "husband" Spiro and mother-in-law Sophie, has anything but a boring normal life. But when Spiro is gone longer than usual on one of his excursions, Sophie starts asking Georgie questions non-stop. Georgie doesn't get worried until she starts receiving strange emails and finds Spiro's cell phone in his room. Then when Georgie and her friend, Keith, come across the body of Big Dom, the closest restuarant rival, face down in the river things get even crazier. Are the authorities really look at Georgie as a suspect ? Not only does she have to try to solve the mysterious emails and get her husband home save but she has to clear her name of Big Dom's murder.

Along with the aid of Inky, tattoo artist and Spiro's new love interest, she ventures down some dark roads but determined she plows ahead.

Susannah Hardy has a knack with her story telling to capture the reader with the first sentence and keeps your interest through until the end. And the surprise in the end will blow your mind !!!

As this is the first in a series, I am sitting patiently waiting for book 2....well as patient as a reader can be. This is definitely a book to add to your reading list and an author for start following.