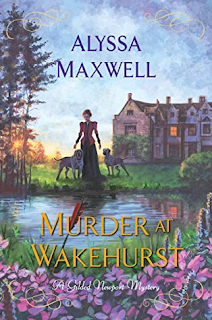 In the autumnal chill of Newport, Rhode Island, at the close of the nineteenth century, journalist Emma Cross discovers an instance of cold-blooded murder on the grounds of a mansion... Following the death of her uncle, Cornelius Vanderbilt, in September 1899, a somber Emma is in no mood for one of Newport's extravagant parties. But to keep Vanderbilt's reckless son Neily out of trouble, she agrees to accompany him to an Elizabethan fete on the lavish grounds of Wakehurst, the Ochre Point cottage modeled after an English palace, owned by Anglophile James Van Alen.

Held in Wakehurst's English-style gardens, the festivities will include a swordplay demonstration, an archery competition, scenes from Shakespeare's plays, and even a joust. As Emma wanders the grounds distracted by grief, she overhears a fierce argument between a man and a woman behind a tall hedge. As the joust begins, she's drawn by the barking of Van Alen's dogs and finds a man on the ground, an arrow through his chest.

The victim is one of the 400's most influential members, Judge Clayton Schuyler. Could one of the countless criminals he'd imprisoned over the years have returned to seek revenge--or could one of his own family members have targeted him? With the help of her beau Derrick Andrews and Detective Jesse Whyte, Emma begins to learn the judge was not the straight arrow he appeared to be. As their investigation leads them in ever-widening circles, Emma will have to score a bull's eye to stop the killer from taking another life...   (Summary via Goodreads)
You would think that reading a book based in the 1800's things would be so much simpler.....except when it comes to murder and trying to solve the case.  However main character Emma Cross in the Gilded Newport Mystery series doesn't make things easy and even though she is a reporter, she cannot help but get herself in the middle of trying to solving a murder ..... especially when she's the one to come across the dead body.
In Murder at Wakehurst, the ninth book in this amazing series by Alyssa Maxwell, Emma and her family have just laid her Uncle Cornelius to rest and are in the mourning period.  But her cousin Neily who has been on the outs with his father and family for years wants to go to a party and when his wife, Grace, asks Emma to go, she finds it hard to decline.  Grace is worried about Neily's behavior and knows that if Emma is there, they can keep an eye on him.  Unfortunately Emma didn't know that she would stumble across a dead body which is the body of Judge Clayton Schuyler a member of the Four Hundred.
But the worse fright for Emma is when Detective Gifford Myers shows up to investigate the murder instead of Emma's friend, Detective Jesse Whyte and she is told that Detective Myers has been assigned homicide because Emma and Jesse "working" together to solve crimes were not good for the department.  Luckily Jesse did not get fired but has been demoted and is assigned a robbery case that may be tied to the murder as well.
No matter what people say Emma cannot help but ask questions, that is what makes her a great reporter and why her boss and "boyfriend" Derrick Andrews allows her the freedom to follow stories wherever they take her....even if it could be dangerous.
Emma doesn't know how close she is to the actual murderer when she is questioning people of interest until it is almost too late.  Emma's list of suspects seems to grow daily and she is unable to confidently remove anyone from the list and instead finds the list growing.
Readers will thoroughly enjoy Murder as Wakehurst as well as the previous books in this series and they will instantly love Emma and  everyone around her.  And her relationships, personal and business, with Derek will tug at your heartstrings.   And Maxwell's ability to sweep the reader back in time and make you feel like you are there experiencing everything and seeing everything through Emma's eyes is out of this world !!
Review by Missi M.
Posted by Cozy Mystery Book Reviews at 12:14