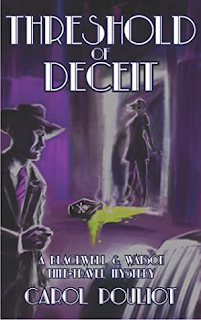 On a sunny spring day in 1934, local lothario Frankie Russo is murdered in broad daylight. Detective Steven Blackwell discovers Frankie’s little black book, a coded list of dozens of flings, affairs, and one-night stands−and a solid motive for the widow. Soon, what appeared to be a straight-forward case gets complicated. A witness goes missing, a second body turns up, the victim’s cousin disappears, and an old flame surfaces. Faced with conflicting pieces of evidence, Steven creates a psychological portrait of the killer and realizes he’s looking for someone wearing a mask. But the killer is not the only one in disguise.Since Steven came face to face with 21st-century journalist Olivia Watson two months ago, they’ve experimented within the safety of their house. Now, they test the boundaries of time travel, risking the exposure of their secret. Olivia travels to 1934, where she is embraced by the community, unaware of who she really is. She unwittingly falls in with Steven’s main suspect, an act that threatens her life.Can Olivia outsmart a killer before becoming the next victim? Can Steven and Olivia solve the case of the poisoned philanderer in time to protect her true identity and their time-travel secret?Every moment’s a masquerade in THRESHOLD OF DECEIT, the second book in The Blackwell and Watson Time-Travel Mystery series.  (Summary via Goodreads)
Carol Pouliot puts a unique spin on the cozy mystery by adding time travel into the story in the Blackwell and Watson Time-Travel Mystery series and readers will be hooked !!!
In the Blackwell and Watson Time-Travel Mystery series readers will hang around with two main characters 80 years apart and then bring them together !!  Olivia Watson is a journalist living in the 21st century and Detective Sergeant Steven Blackwell lives in the year 1934 and they have discovered that they can pass into each others time by holding hands and walking over the threshold of Olivia's bedroom which was Steven's mothers bedroom in his time.
In Threshold of Deceit, the second book in this series, Olivia and Steven are having a ball getting to know each other and learning about time traveling within the house.....but, of course, they want to take it further so they decide to see if they can leave the house and venture out into town.  And Olivia is the one who gets to do it first.  They start off with going to the local pub for dinner where she meets some of Steven's friends, then she stays alone in the house in his time to see if the house is the pull or Steven is.  When everything goes well, Olivia is going to spend a day walking around town in 1934.....
Unfortunately in Steven's time there is a murder.  Frankie Russo is found dead down a gully behind the high school while the whole town was focusing on the parade in town.  Frankie Russo was married but he had a history of cheating and flirting so Steven and his department have their hands full trying to find the killer.  And to make it harder Frankie was working one week in Knightsbridge and the next week in Syracuse which means they may have to look beyond their town for more suspects......
While Olivia and Steven are getting to know each other as well as the times they both live in, Steven cannot help but tell Olivia about the cases he gets involved in but with Olivia spending more time in his time period getting to know people, she may be getting too involved and not even know the danger she is heading towards.
Readers will thoroughly enjoy this series and not want the book to end.  You will enjoy traveling back to 1934 and seeing how Olivia adapts so quickly to the ways and behaviors and when Steven walks over the threshold and sees the future, you cannot help but laugh because you can totally picture his excitement about seeing the television and cars.  And the way that Pouliot is hinting about the two and their relationship, you cannot help but want to see them get together and take it to the next level.......  So go grab your copy and get ready for a story that will pin you to your seat !!!
Review by Missi M.