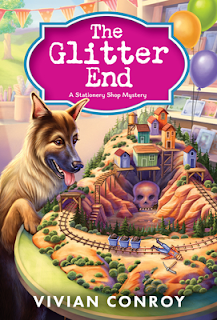 The third book in the Stationery Shop Mystery Series from Vivian Conroy! Murder is on display in this small-town cozy mystery!Perfect for: For fans of Lauren Elliot and Essie Lang. For readers of cozy mysteries and small-town fiction. Stationery shop owner Delta Douglas is finally settling into small-town life in Tundish, Montana. But with the tourist season drying up, she must find a way to draw in her stationery shop clientele. Well-known artist Tilly Tay is just the ticket--and her new miniature gold mining display is sure to be a hit attraction in town.But on the day of the grand reveal, Delta discovers a tiny prospector dead in the exhibit. That's when a body is found at the nearby motel, perfectly mirroring the miniature murder. Soon enough, Delta's artist guest is suspected of the crime and her shop is suddenly cast under a cloud of bad press. With her faithful Paper Posse at her side, Delta must pull no paper punches to crack the case and save Wanted's reputation before more trouble comes into the fold.  (Summary via Goodreads)

The Stationery Shop Mystery series by Vivian Conroy is such a hoot to read !!  This series is set in a little town in Montana called Tundish and the town is focused on gold mining and the Wild West.  Main character Delta Douglas moved there to be closer to her college roommate Hazel and help her run her stationary shop, Wanted.  While Delta is still getting use to small town living and getting to know the people and the businesses in town, she somehow gets entangled in a murder investigation.  And The Glitter End, the third book in the series, is no different.

In The Glitter End Delta invites Tilly Tay an artist that specializes in creating towns and people in the minature form to built a minature version of Tundish and display it in the shop for a few weeks to bring some business to the town as it heads into the slow winter months.  Unfortunately shortly after Tilly arrives Delta witnesses her arguing with a gentleman whose identity she lies about.   When the gentleman is found stabbed to death in town, Tilly is arrested for his murder.  Delta and her friend Jonas feel that they need to look into the murder seeing as Delta is the one to bring this all into their small town.

Not only does Delta have the murder to look into but her grandmother starts hanging around a man new to town and there are rumors that he isn't who he says he is.  Delta is very close to her grandmother and will never forgive herself is her grandmother gets hurt or taken advantage of.

Conroy keeps the reader thoroughly invested in The Glitter End till, well, the end actually and readers will wonder if family is always who they say they are as Delta and crew uncover a lot of secrets and shady characters in Tilly's life.  And even though there was a murder readers will still want to pack a bag and hit the road to Tundish to check out the shops and the scenery.......