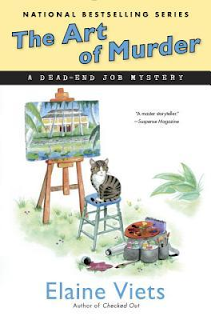 From the national bestselling author of Checked Out , Helen Hawthorne must pose as a painter at Fort Lauderdale’s famous Bonnet House Musuem to catch an artful killer . . .The art world is a happening place—but a brush with death shouldn’t be in the picture. Unfortunately that’s just what happens to Helen Hawthorne and her friend Margery. While touring gorgeous Bonnet House, a mansion-turned-museum, they observe a painting class and note an up-and-coming artist. When they later see her deadly end, Helen is hired to canvas the crime scene—undercover, of course.  Sketchy suspects lurk in the victim’s bohemian past. Was the promising painter killed by her jealous husband? Her best friend? A rival using her artful wiles? With her husband Phil busy setting a trap for a gold thief, it’s up to Helen to paint this killer into a corner . . .  (Summary via Goodreads)
I have LOVED reading the Dead-End Job Mystery series by Elaine Viets.  Hanging around the Coronado Tropics Apartments with main character Helen Hawthorne and watching her grow throughout this series has been such a treasure.  When the Dead-End Job Mystery series started Helen was on the run from her cheating lazy ex-husband.  She left him and vowed he would never see another penny from her even though the divorce judge "sentenced" her to pay him a portion of her earnings.  So she got an apartment in the Coronado Tropics Apartments and took dead-end jobs paying cash so that she could keep that vow.
Well throughout the series she became close to her landlady Margery and a few of the other tenants, especially her next door neighbor Phil who she eventually married and in the last few books in the series Helen and Phil opened up their own private investigating business, Coronado Investigations.
The series sadly concludes with the fifteenth book, The Art of Murder, and Viets does the series justice.  In The Art of Murder Helen and Phil are working on two separate cases.  While Helen and Margery are touring the Bonnet House Museum and Gardens they see the end of an art class being held and, of course, start talking to the teacher and students.  Helen decides to start taking the class and when they are walking out and one of the students gets sick and collapses, she knows that she has to find out more.  The next day Helen learns that the student, Annabel, who was an up and coming artist passed away.  One of the other students, Jenny, knows that she was murdered and hires Helen to find the killer.  While Helen is doing all this Phil is hired as a night security guard for a high rise condominium by the community association manager.  Someone is breaking into the penthouses of the buildings in the association and stealing gold coins.
Both Helen and Phil have very interesting cases and readers know that they will solve both cases.  However the way they go about solving them is the reason readers cannot help turning the pages quickly and why they returned to this series whenever there was a new book to read.  Viets was able to find very interesting dead-end jobs for Helen to have and murders to solve pertaining to those jobs.  I was very happy when she took the book further by having Helen and Phil get married and open their own investigation service.  Readers cannot help but love their devotion to each other and the cases they take.
I am sorry that my lease is up with the Coronado Tropics Apartments and will miss Helen, Phil, Margery and Peggy and their nightly sunset salutes around the pool.  I will miss the cases and the jobs that Helen and Phil take to put some crafty characters behind bars.  I know that whenever I feel lonely for them, all I have to do is go back and open one of the books and they will welcome me with a drink by the pool......
Be sure to check back next month if you're a fan of Elaine's because I will be starting her Josie Marcus, Mystery Shopper series !!!
Review by Missi M.
The Dead-End Job Mystery series books in order are :
Shop Till You Drop
Murder Between the Covers
Dying to Call You
Just Murdered
Murder Unleashed
Murder with Reservations
Clubbed to Death
Killer Cuts
Half-Price Homicide
Pumped for Murder
Final Sail
Board Stiff
Catnapped !
Checked Out
The Art of Murder
Posted by Cozy Mystery Book Reviews at 12:57