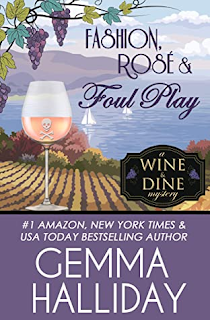 Emmy Oak has always been a fan of her best friend Ava's handmade silver jewelry. So when Ava gets a chance to showcase her pieces at a charity fashion show for Wine Country's elite, both women are thrilled. That is, until the model wearing Ava's custom emerald necklace is murdered after her runway walk and the gem is stolen! The theft of the expensive jewel means Ava could lose everything, including her shop, Silver Girl... unless Emmy can help her track down a killer and find the missing emerald!

While the enticing Detective Grant might be looking at the death as a burglary-gone-wrong, Emmy isn't so sure that's the case. The model's name was Gia Monroe, and Emmy quickly learns that she made her fair share of enemies in life. From the flamboyant designer overheard threatening her just before the fashion show, to her agent with a shady secret and a precarious hold on his talent, to an eccentric rival designer with a grudge, no one seems to be grieving Gia's death. And when Emmy discovers Gia may have had a mysterious stalker, she realizes any one of them could have murdered the model. Between running her small winery and navigating the catty world of high fashion, Emmy tries to stay one step ahead of the danger...before the killer strikes again!   (Summary via Goodreads)

The Wine & Dine Mystery series by Gemma Halliday is a captivating series.  Readers cannot help but fall in love with this series and everything about it.  And with Fashion, Rose, & Foul Play being the sixth book in the series readers are invested and a part of the series.

In Fashion, Rose & Foul Play the story is centered around Ava who is main character Emmy's best friend.  Ava has her own shop Silver Girl which is a jewelry store full of her own custom made silver jewelry and she is trying to expand her business and get more recognition....which is exactly what the plan is when she is showcasing her pieces at a fashion show at a charity event at an exclusive country club.  At this event the models will be wearing her jewelry and the last model will be wearing her more expensive piece yet .....a necklace with a very big and expensive emerald on it.

Unfortunately right after the show when the models are changing and taking off the jewelry, the model wearing the emerald necklace is found dead in her dressing room....and the murder weapon is the necklace ...but the emerald is missing !!

Of course Emmy and Ava cannot just sit pretty and wait for the cops to find the murderer and thief even if Detective Chris Grant is the detective on the case.  Emmy knows first hand how seriously Grant takes his cases and how dedicated to the job he is seeing as she has been involved in cases before and that is how they met and how they developed feelings for each other.  And even though Grant wants Emmy to be safe and not get hurt, she will run straight into danger for her best friend.

Fashion, Rose & Foul Play's storyline is such a HOOT !!  The characters involved in the modeling scene are a colorful bunch and it seems they have a lot of secrets and no one tells the truth.  This all makes for a great read but a hard case to solve.  And the road that the girls take to get to the end result is worse that the scariest rollercoaster.  And it is always fun when their "friend" David Allen tags along for the ride.  He always brings more life to the party .... sorry maybe bad choice of words there ??

The Wine & Dine Mystery series is a great series to get lost in.  Readers will instantly fall in love with Emmy and her friends, the vineyard and surrounding area and even the murders will entice you.  Once you start reading you will wish you were there hanging around with the bunch.  But sitting on your couch with a glass of your favorite wine and a snack will be just as good !!!