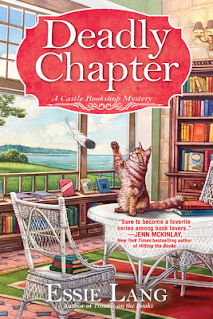 Thousand Islands bookseller Shelby Cox is caught between a lethal rock and a hardheaded newcomer in Essie Lang's third Castle Bookshop mystery, a must-read for fans of Lorna Barrett and Vicki Delany. Wake up on a houseboat, moored in scenic Alexandria Bay, New York. Ride the gentle waves to work at quaint Bayside Books, where you spend your days supplying literature and conversation to the charming locals and seasonal tourists. Sounds pleasant, doesn't it? Except bookseller Shelby Cox has already sleuthed two murders from Bayside Books's home base on Blye Island, one of New York State's famed Thousand Islands. And this time, mayhem knocks right on Shelby's waterside door when she finds a body lodged between the side of her houseboat and the dock, his skull shattered.The victim is no local, but Shelby can't shake the feeling she's seen him before. Twice, in fact--that's how many times he's dropped into Bayside Books asking about an enigmatic woman who lived on Blye Island many years before. The last time? The day before he was found. But the poor man obviously was killed elsewhere, so who brought him down to the bay, and why?When the victim's daughter hits town demanding answers, Shelby takes the case, despite Police Chief Tekla Stone's usual reservations. But she uncovers more suspects than there are pages in War and Peace, and Shelby can expect no peace--except the peace of the grave--unless she can turn the page on this grisly mystery.  (Summary via Goodreads)

Readers cannot help but fall in love with the Castle Bookshop Mystery series by Essie Lang.  Three reasons are in the series name.....Castle.....Bookshop.....Mystery.  And when you add everything else into the mix, you are a goner !!  A Deadly Chapter is the third book in this series and whether you've read the previous two or this is your first book in the series, you are going to enjoy everything about it.

In A Deadly Chapter readers are hanging around with main character Shelby Cox.  Shelby co-owns Bayside Books with her aunt Edie and they have 2 stores.  They have the main store in Alexandria Bay in the Thousand Islands and the other one, a smaller one in the castle on Blye Island.  Shelby runs the store in the castle, lives on a houseboat, has a boyfriend, Zach, who is a Coast Guard Investigator and currently away.  She also has a friend, Erica, who owns the Chocomania and supplies Shelby with caffeine so her life is full and reasonably content.  However she cannot help but seem to get in the middle of murder investigations.  But in A Deadly Chapter it is not her fault because the dead body came knocking on her door....okay well it was in the water and hitting her houseboat but still.

After Shelby discovers the body she does try to stay out of the investigation until she finds out she knows the deceased daughter, Hilary, and she asks for Shelby's help.  Turns out that the deceased, Nathan Miller, had been into the bookstore on a few occasions asking questions about a woman who may have moved to the area about 7 years prior.  While Shelby is helping Hilary look into her father's murder, she is confronted with two personal issues herself.  While she tries to stay focused on the murder investigation, these other two issues pop back into her head a lot.

Readers will fall in love with Shelby instantly and it will amaze you how she is always willing to help anyone out....even when she has personal demons of her own to deal with.  Shelby's life will be one you could possible long for...living on a houseboat with her cat, working in a bookstore in a castle on an island, having to take a boat ride to get to work every day, having a friend who makes delicious drinks and chocolates, having a great boyfriend and aunt. Lang will draw you into the story effortlessly and you will be so captivated by her words that you will be lost to everything around you.