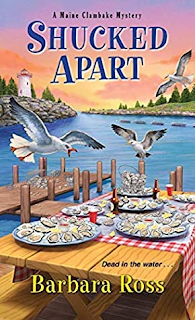 The Snowden Family Clambake Company has a beloved reputation in Busman’s Harbor, Maine. Almost as famous is the sleuthing ability of proprietor Julia Snowden, which is why an oyster farmer seeks her out when she’s in trouble.

When Andie Greatorex is robbed of two buckets of oyster seed worth $35,000, she wonders if somebody’s trying to mussel her out of business. Could it be a rival oyster farmer, a steamed former employee, or a snooty summer resident who objects to her unsightly oyster cages floating on the beautiful Damariscotta River? There’s also a lobsterman who’s worried the farm’s expanding lease will encroach on his territory and Andie’s ex-partner, who may come to regret their split. Before Julia can make much headway in the investigation, Andie turns up dead, stabbed by a shucking knife. Now it’s up to Julia to set a trap for a cold and clammy killer . . .   (Summary via Goodreads)

I am a fan of the Maine Clambake Mystery series by Barbara Ross and even though I haven't read all of them I feel that I know the Snowden family quite well and the series is more than just "books" to me.  So when I tell you that I had to stop and gather myself when I finished Shucked Apart, the ninth book in the series, BELIEVE ME.

In Shucked Apart the Snowden Family Clambake Company, as well as all of Busman Harbor, Maine, is getting ready for the summer season.  Even though Julia is confident that things are on track, she still has to hire the crew and finalize everything before they kick off the season.  So she really doesn't have time for her boyfriend, Chris, to throw a wrench into the mix.  Well Chris throws more at her than just a small wrench.  He introduces Julia to a member of his poker playing group, Andie, who owns an oyster business and she was just robbed of 2 buckets of oyster seed worth $35,000.  Andie is at the advantage of knowing more about Julia because Chris brags about her during their poker games, however, Julia had though when she heard the name Andie that she was a he.  While she gets over than fact quickly she finds that Andie is a very hard working motivated business woman and agrees to help her find out who robbed her of the oyster seed.  Unfortunately before she can come to any solid conclusion, Julia finds Andie in the water by the oyster farm dead with a knife stuck in her neck.

Julia knows that she should let the detectives in charge of the case handle the case but there are things that don't add up to her and she had helped them in the past so......  Luckily Julia knows Lieuteant Binder and Sergeant Flynn from Major Crimes so she can keep investigating....or is that unlucky for her ??  Either way she has a list of people that wanted Andie gone for various reasons, unfortunately one of them is her uncle Bob.

Julia is pretty confident that her uncle had nothing to do with Andie's murder and robbery but she will not play favorites and will go where the investigation takes her even if she isn't "on the case" and should be helping her brother-in-law Sonny go through the piles of employee applications and concentrate on the family business.

Readers by now know that once Julia sets her mind on something she goes at it full throttle and in Shucked Apart that will be no different.  Readers cannot help but fall in love with her and her family, friends, community and even the story surrounding the murder is captivating.

When a reader reads a series and they read every book in that series, by the time they get to the ninth book they are a part of that series.  The people are your people, the town and the community are your town and community.  You have developed feelings and are invested and want the best for everyone.  So with that said.....when I got to the end of Shucked Apart I was flappergasted, shocked, and sad.  Ross takes something in the story and changes it...maybe forever.  Readers will not see it coming however they will be left in shock.  I don't know why Ross would do this but I am sure she has a very good reason for this and I look forward to the next book to see where she takes it.