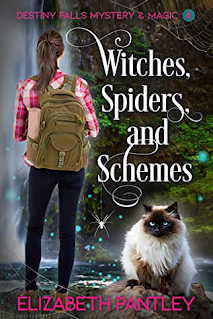 A magic mirror to an enchanted world... A mysterious ghost... A hilarious, perpetually annoyed witch... A brave, sassy cat... Two unexplained deaths and a mysterious community filled with secrets... Can Hayden and the people of Destiny Falls solve the mystery and return the community to its peaceful, enchanted existence?Hayden’s adventures in Destiny Falls continue in book four of the Destiny Falls Mystery & Magic series. Starting with a strange old woman at a cave and her father’s mysterious ferry journey, there are secrets to be unwound.The enchantments in Destiny Falls are showing cracks, and Hayden suspects that it is tied directly to her family, which has a history that’s more complex than she realized. When two bodies are found floating in the bay it’s clear that the mysteries surrounding Gladstone and the ferry are more dangerous than people realize. And then . . . those spiders.Luckily, Hayden and her sassy sidekick, Latifa have developed a group of family and friends in this enchanted place who are all ready and willing to help solve the mystery, and release Destiny Falls to resume its normal, amazing, enchanted existence.Hayden’s many adventures in Destiny Falls will keep you guessing with each book in this intriguing series.   (Summary via Goodreads)

When I pick up and start reading a book in the Destiny Falls Mystery series I am already thinking about what I want to say in my review.....but then I get so engrossed in the story that I completely forget what I was thinking about.

Witches, Spiders, and Schemes in the fourth book in this amazing series byElizabeth Pantley and with each new book readers are taken further and further down the "rabbit hole" and you will not want to leave !!

In this series Hayden who was living in Seattle with her grandmother, great-grandmother and best friend falls through a magical mirror and ends up in Destiny Falls where she is reunited with her father and brother and introduced to more family members, friends and the magic that is within Destiny Falls.  With each new book in this series, we get to dig deeper into Hayden's magical town and people and witness and learn about the magic along side Hayden.  Oh and even in a magical place, unfortunately there is still murder and mayhem.....maybe more mayhem than normal.

In Witches, Spiders, and Schemes Hayden and her brother Axel learn of what their true destiny will be if they open up to it.  And also Hayden is introduced to her father's sister and sons but learn that one of the sons isn't who everyone thinks he is.  Hayden also learns more about her connection to the mysterious bad magic island Gladstone that everyone is afraid to even say the name out loud.  And when her father goes to Gladstone to finally see Hayden and Axel's mother who they believe is being held there due to black magic, the town of Destiny Falls starts to lose it's magical components......

I know that I say this with every new book in the Destiny Falls Mystery series but it bears saying every time....if you are a fan of Harry Potter, you will fall in love with this series completely.   And the way that Pantley ends each book, you have to get your hands on the next one as soon as possible to see what is going to happen next.  Each new book makes the reader want to look through their mirrors with hopes of falling through to Destiny Falls.....I know I take an extra long look at mine.....wishful thinking but hey ya never know !!