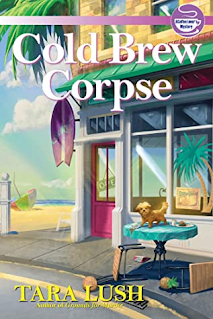 Espresso bar owner Lana Lewis returns in Tara Lush's second Coffee Lover's mystery, a stimulating read that fans of Cleo Coyle and Laura Childs will savor to the last drop.It's a steamy September, and business is brisk at Perkatory, the hottest coffee shop in Devil's Beach, FL. Much of the clientele pours in from Dante's Inferno, the hot yoga studio next door. But the bright, sunny Gulf Coast days turn decidedly dark-roast when the body of the studio's owner turns up in a nearby swamp.Between running Perkatory and training Stanley, her golden Shih Tzu puppy, reporter-turned-barista Lana Lewis is too busy to go sleuthing. But when the editor of the local paper asks her to write about the murder, Lana's dreams of getting back into journalism start to percolate.Lana discovers that the yogi has a nefarious past and her share of mug shots, so grinding her way through the suspect list is a large task. She learns that the victim was fatally beaned by an SUV before she was dumped in the swamp. But was the killer one of her students? An envious yoga teacher? Or a local photographer who seems to know too much?But no one tells Lana Lewis what to do. Hunting the caf-fiend who killed the yogi puts Lana and Chief Noah's relationship--and Lana's life--in very hot coffee.  (Summary via Goodreads)

In Cold Brew Corpse, the second book in the Coffee Lover's Mystery series by Tara Lush main character Lana Lewis is settling in comfortably back in her hometown of Devil's Beach in Florida.  She returned home after going through a divorce and losing her journalism job in Miami.  Luckily she has her childhood house to live in and a job at the family coffee house, Perkatory.

In Cold Brew Corpse the only thing that Lana should be worrying about is making sure the cold brew recipe is perfect.....unfortunately when Raina, the owner of the yoga studio next door, Dante's Inferno, is reported missing, her journalism senses kick in.

No matter what Lana does she cannot get it out of her head to look into Raina's case and when her body is found and ruled a homicide, she really wants to dig in....unfortunately writing for the local paper is out seeing as their budget doesn't have the funds to pay her freelancing.  And when she tells her sort of boyfriend Police Chief Noah Garcia what she has uncovered, he is unable to do anything with the information because the case was taken from him by the higher ups.

Things will not deter Lana from continuing to look into Raina's case and when someone is arrested for the murder she doesn't feel like the right person is behind bars but she is unclear as to what she can do about it......

Readers will fall in love with this series and lucky for you if you haven't read these books, it's not too late to catch up.  There is so much to like and you will want to go to Perkatory and Devil's Beach as soon as you can pack a bag.......