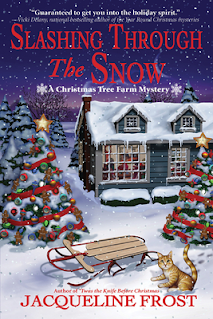 Maine innkeeper Holly White returns to sleuth another seasonal slaying in the third Christmas Tree Farm mystery from bestselling author Jacqueline Frost.Reindeer Games Christmas Tree Farm is going into the B&B business, and Holly White is looking forward to her new role as innkeeper. Even better, Mistletoe, Maine's sheriff, Evan Gray, has deputized his little sister Libby to help Holly wrap presents for Mistletoe's toy drive. But a cold wind ruffles the cheery holiday decorations when a new guest checks in: Karen, a vicious B&B critic, who could make or break the new inn. And the short December days turn even darker when Evan and Libby find Karen's dead body in the gift-wrapped toy donation box.The suspect list is longer than Santa's naughty list, and local resident Cookie is on it, since her fingerprints are all over the murder weapon, a metal nutcracker that she gave to Holly. So is Libby, who recently moved to town from Boston in less-than-savory circumstances. But cranky Karen was an oh-holy-nightmare to lots of the townsfolk, such as Evan's reporter friend Ray; Christopher, the inn's former contractor; and confectioner Bonnie, whose Gum Drop Shop was a direct target of Karen's scathing prose.To figure out the killer's identity and clear Cookie's name, Holly and her friends brainstorm at The Hearth, the farm's café, while her mother keeps them fueled with Christmas goodies fresh from the oven. But if they can't put the culprit on ice, Holly may never see another Christmas.   (Summary via Goodreads)

I fell totally in love with this series after reading the first book, "Twas the Knife Before Christmas, and continued that love with the second book, Twelve Slays of Christmas and was very excited to open Slashing Through the Snow, the third book, and get lost in the story !  You don't have to read the previous books to fall in love but I think you would want to start at the beginning to get the whole package.

In Slashing Through the Snow Holly White and her family have their hands full running the family business, The Reindeer Games Christmas Tree Farm, and Holly especially is busy because this is the first season for the Bed and Breakfast they built.  As inn keeper Holly takes pride in her job as well as everything and anything to do with the Farm and will stop at nothing to protect it, the town and especially the people.  And when a gift given to her by her dear friend Cookie is used as a murder weapon and Cookie is the top suspect, Holly jumps into detective mode.....however, her boyfriend Sheriff Evan Gray does not like it one bit !!

As soon as you open a book in this series you are taken away to a Christmas wonderland in your head.  You will instantly see everything clearly and feel like you are right there in Mistletoe enjoying everything Christmas.... the great thing will be that you will be toasty warm sitting in your favorite reading spot drinking your favorite drink and munching your favorite snack....and I wouldn't blame you if it was hot cocoa and cookies !!

Reading the Christmas Tree Farm Mystery series is like watching a Hallmark movie in your head.  You will love the characters, the town and you will be right there along side Holly as she goes around town snooping and looking for clues to prove her dear friend Cookie's innocence.

And not to say too much and ruin any part of the story but the last chapter had me crying in a good way and I cannot wait until the next book to see the direction Frost takes the people of Mistletoe.....