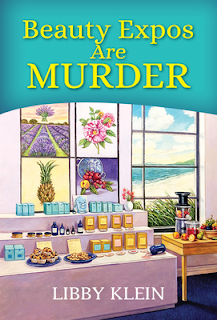 Gluten-free baker Poppy McAllister is about to see the ugly side of beauty expos...Easter weekend on the Jersey Shore is hopping. Poppy's Bed and Breakfast is busier than ever, but she needs to leave things in the hopefully capable hands of Aunt Ginny--and paws of Figaro the black smoke Persian. She's selling her paleo muffins and keto cookies at the Health and Beauty Expo in Cape May's Convention Hall. Normally sharing a booth with the love of her life would be a treat, but she's recently discovered secrets that throw her new romance into chaos.But more secrets are about to be exposed at the expo. In his keynote address, prominent cosmetic surgeon Dr. Lance Rubin reveals his breakthrough anti-aging technology. Unfortunately, someone has one-upped him with a truly foolproof anti-aging formula: murder. With the plastic surgeon dead under his own UV mask, and bedlam reigning in the hall and back at the B&B, Poppy needs to follow a twisted trail marked by glowing footprints to unmask a killer...   (Summary via Goodreads)

Poppy McAllister always has a lot going on but it looks like things may be slowing down in one area of her life....since the first book, Class Reunions are Murder, Poppy has been juggling two men.  She returned home to Cape May to live with her Aunt Ginny and attend her class reunion where she reconnected with her high school sweetheart Tim.  She also met Gia and started baking for his coffee shop.  Well finally in Beauty Expos are Murder she is committing to Gia.....but, of course, with Poppy it won't be as easy as she hopes.

In Beauty Expos are Murder Poppy and Gia have a booth at the Health and Beauty Expo being held at the Convention Hall as well as everything else they have going on.....him running the coffee shop, her running the Bed and Breakfast with her aunt.....and then Gia's wife comes to town and there's a death at the Expo and Poppy happens to be the one to discover the body !!

Now back to the dead body..... Dr. Lance Rubin is a cosmetic surgeon who is very popular and the big draw to the event so when it is his body that winds up dead, you know there is going to be a lot of pressure to solve his murder....and when one of Poppy's high school enemies asks for help on another case, she finds it hard to say no.  Seeing as the person asking is a cop and Poppy has sort of helped her in the past, she finds herself in the middle of a major mess !!

There is so much going on in Beauty Expos are Murder that you will stay up past your bedtime and neglect other things in your daily life just so you can stay on top of what is going on with Poppy.  The characters in this story will feel like real people that you will grow to love and want to protect.  You might even find yourself putting together a list of things to pack so you can go stay at the B&B and tag along with Poppy until you realize you are reading a book......