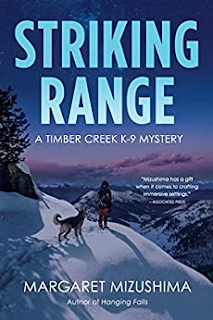 A deadly secret is buried in the Colorado high country--and murder is only the beginning in the seventh gripping installment of Margaret Mizushima's Timber Creek K-9 mysteries.He was suspect number one--the man who tried to kill Deputy Mattie Cobb and may have killed her father thirty years earlier. But when Mattie and cold case detective Jim Hauck reach the Colorado state prison where they will finally get to interview him, he's found dead in his cell. There's only one clue: a map leading to Timber Creek and rugged Redstone Ridge.Though she usually works with veterinarian Cole Walker, Mattie's K-9 partner Robo has just sired a litter of pups, who require special, time-consuming care at Cole's clinic. Left to explore the map's clue without him, Mattie and Robo journey into the burned forest surrounding Redstone Ridge. But before they can finish their search they're called to help investigate the death of a young woman found in a campground filled with elk hunters. Identification of the deceased points to her having recently given birth, but the infant is nowhere to be found.As a deadly storm descends upon the mountains, covering everything with a layer of ice and snow, Mattie and her team search for the missing newborn. The storm batters the area, taking its toll on the team and forcing the sheriff to call in reinforcements. When new evidence surfaces, they decide that finding the woman's killer will lead them to her baby, making them even more desperate to solve the case.Then Cole goes missing, stranded alone in the high country with a person that Mattie now suspects is the mastermind behind several murders, including her father's. She and Robo take to the trail to find Cole--but the killer has a cold-blooded plan that threatens them all.   (Summary via Goodreads)

Normally when you read a cozy mystery and there are animals involved, they are cute, cuddly, and if they help solve the case, it is mostly by accident or luck.  However, in the Timber Creek K-9 Mystery series by Margaret Mizushima, the animal character is one of the main characters and even though Robo is cute and cuddly, he is trained to bring down the bad guys.  Robo is a German shepherd and well trained in the field and works specifically with his partner, Deputy Mattie Cobb in the K-9 department in Timber Creek County in Colorado.
In Striking Range, the seventh book in this series, the story starts with Mattie visiting another jail where she is meeting another detective, Detective Hauck, who specializes in cold cases and they are going to interview John Cobb who killed Mattie's brother and tried to kill her.  They are hoping to get some answers from him regarding Mattie's fathers death which happened thirty years ago.  Unfortunately before they can interview the inmate, he is found dead in his cell and the case of death looks to be a drug overdose.  This provides more questions than answers and sends Mattie, Robo, Detective Hauck, and her department in Timber Creek up the mountain where she was held hostage but escaped......
While the group is imvestigating the site where Mattie was held looking for answers, they also have a dead body found in a campground in town.  It is identified as a pregnant woman that was just at Mattie's boyfriend's animal clinic but she is no longer pregnant at the campsite.  Mattie, Robo and another detective Stella are racing the clock trying to solve her murder and find the baby......little do they know the web they are about to walk into.
Mizushima has such a talent in drawing the reader into the story immediately and keeping you focused on everything going on until you reach the end of the book and can breathe again.  I highly recommend this series and know that you will instantly fall in love with everything and everyone involved.
Review by Missi M.