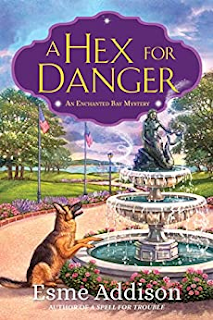 The annual Mermaid Festival is the setting for Esme Addison's sunny-yet-sinister second Enchanted Bay mystery, perfect for fans of Heather Blake and Bailey Cates. The small town of Bellamy Bay has its share of skeletons in its closet, but it isn't used to bodies turning up in the local history museum. After all, this coastal North Carolina town is much like any other...except, of course, for the mermaids.

Helping to run the family business, an herbal apothecary while keeping her supernatural secret hidden is no easy feat for water witch Aleksandra Daniels. But somehow she's still found time to help her friend Celeste, who has her own Caribbean mermaid heritage plan the annual Mermaid Festival. As fun-seekers throng the beaches, Alex gets to know and is intrigued by renowned artist Neve Ryland, who's in town to decorate the local park with a mermaid-themed mural. Celeste, however, is less enamored with the artist, as Neve has been spending entirely too much one-on-one time with her boyfriend Jasper, director of Bellamy Bay's history museum. Then, a reception for Neve ends abruptly when the artist is found dead in his office.

The police investigation nets Celeste who asks Alex to find the true culprit. With the help of her magically-inclined aunt and cousins, Alex dives in to clear her friends name. But there was more to Neve Ryland than met the eye...and Alex fears she may be in way too deep. Will she catch the crook or be next on the hook?   (Summary via Goodreads)

Mermaids ???  What ???
The Enchanted Bay Mystery series by Esme Addison is a very unique cozy mystery series and I'm going to do my best to tell you about it without giving away the magical secrets !!
A Hex for Danger is the second book in this series and the coastal town of Bellamy Bay in North Carolina is gearing up for it's annual Mermaid Festival and one person Aleksandra "Alex" Daniels and her family cannot wait.  Alex just recently moved to Bellamy Bay, her mother's hometown, after her father passed away and she was looking for a change and quieter life.  Until recently she was living in Manhattan working as a risk analyst for a big company but she needed to be around people who loved her and even though her mother was gone also, she knew her aunt and cousins would welcome her with open arms.  Which they did and now Alex  is living with her aunt Lidia and cousin Minka and working with them in the family shop Botanika which specializes in herbal apothecracy.  Alex is also learning more about her background and that her mother's side of the family are descendants from a real mermaid and that they possess certain powers and abilities.
In  A Hex for Danger Neve Ryland who is a remarkable artist comes to town to paint a mural for the festival.  However before the festival fully kicks off, Neve is found dead in an office at the museum during a reception.  And when it is ruled murder Alex's friend, Celeste is taken in for questioning.  Unfortunately the police seem to only have eyes on Celeste as the murderer because it was her boyfriend Jasper's office and Celeste was very jealous of Jasper and Neve's working together.  Alex knows that Celeste would never hurt someone no matter what the situation is and decides to try to clear her name.  Did I forget to mention that Alex's boyfriend is a detective on the police force and assigned to the case ?  And also Alex's other cousin, Kamila is also on the police force as as officer.
Not only are the police looking into Neve's murder but they have the death of a male that looks to be an accidental overdose whose wife is convinced that he was murdered.  And after Alex meets the wife, she is talked into looking into that case as well.
There is a lot going on in this story and the way that Addison intertwines the stories will have readers wishing they had some mermaid magic and could turn the pages faster.....but you will want to take your time reading every word so that you do not miss anything ..... especially when you get to the last few chapters....there is a lot of things that will blow your human mind !!!!
Review by Missi M.
Posted by Cozy Mystery Book Reviews at 10:49