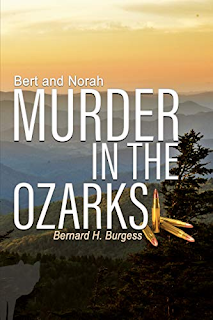 Cases have slowed for B & N Investigations during the summer of 2018. With their new investigator, Becky, returned from a Montana case, Bert and Norah accept a case in Arkansas, a cold case of a woman, Annabel Leery, missing without a trace for two years. With coywolf tracking and companion animal, Missy, sharing rides between the two vehicles, the team travels to Mountain View, Arkansas, a small community situated in the Ozark Mountains. Thus, begins the search for clues, a search which even takes the team from a theory of sasquatch abduction to the obscure trail of a mysterious man. Piecing the clues together, and aided by Norah's psychic insights and Becky's interview skills, the team finally gets the break they were looking for. The break in the case, though, requires that they pack up and leave Arkansas, on a trail which none of them could have forseen, except perhaps Norah. Her glimpses of the future show the grave dangers they must face if they're to have any chance of finding out what happened to Annie. The team have to call upon all their abilities as they undertake a surveillance wrought with challenge and threat. Will the murder in the Ozarks be revealed? Will the personal feelings among the team survive the case of Annabel Leery? Or will they be torn apart by the stresses?  (Summary via Amazon)

In the Bert and Norah Mystery series by Bernard Burgess, Bert and Norah have always worked well together....which is easy for them as they are husband and wife, have had a great life together, raised 2 daughters, are grandparents and Norah's spirit, since her death, has been linked to Bert and they continue as a married couple except in the physical sense.  Luckily Bert has the ability as a medium to see people's spirits which is helpful in their business, B & N Investigators.  Recently they have added an employee, Becky Thompson, who is becoming more than just an employee.

In the fourth book in this series, Bert and Norah : Murder in the Ozarks B & N Investigators are hired to look into the mysterious disappearance of Annabel Leery who walked out of her front door in Mountain View, Arkansas one morning and was never seen again.  She has been missing for two years and her family, mainly the nephew she raised since he was a baby, want to know what happened to her.

So Bert, Norah, Becky and their canine coywolf Missy pack up in Cody, Wyoming and head to Mountain View Arkansas to begin their case.  They had no idea that this case would get very confusing and lead them to Texas and a secluded and potentially dangerous ranch.

Readers will thoroughly enjoy this book as well as the other books in this series.  Burgess puts the words to paper so that they read fluently and your eyes will take them in quickly.  There is no way that the reader will not be captive to the story and everything going on.  Burgess even throws a "love triangle" in the mix as Bert and Becky struggle with their growing feelings.  Even though Norah loves and is connected to Bert, she knows that he needs more than she can give him and she is ready for Bert to move forward.....she just has some convincing to do.  Readers will enjoy that storyline and may even get emotional at times.  And the story behind Annabel's disappearance and what the investigators uncover will totally shock readers !!

I highly recommend grabbing your copy of Bert and Norah : Murder in the Ozarks as well as the previous three books.....they are a read you will be glad you read !!