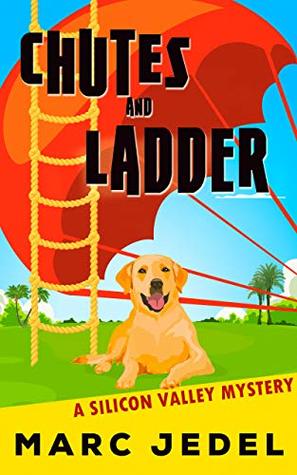 When a camping trip uncovers a murder, this amateur sleuth is stuck putting out the fire …

Marty Golden enjoys time with his nieces, but he wanted to spend the weekend with his new girlfriend — not chaperone a Girl Scout camping trip. Once he stumbles upon the corpse of a friend in the woods, the outdoors adventure becomes an open-air disaster. When the police label it an accidental death, the meticulous Marty vows to investigate the murder. After all, it’s poor manners to let your friend’s death go unsolved.
On the hunt for clues the cops ignored, Marty uncovers a disturbing connection to himself. And as he digs deeper, a misbehaving pup, a kooky cousin, and a maniacal ninja put his survival skills to the test.
Will Marty unravel the mystery before the killer, or his imagination, gets to him?  (Summary via Goodreads)

You have to love Marty's devotion !  Marty Golden is the main character in the Silicon Valley Mystery series by Marc Jedel, he is a software engineer working for a company that has driverless cars.  It's like a taxi company except you place an order for a ride on the Rover app and a car comes to your location and takes you where you want to go and its all computerized.....but that's not the best part of Marty's life....Marty has this overactive imagination and his mind wonders at the most inappropriate times getting him in hot water at times.
In Chutes and Ladder, the second book in this series, Marty gets roped into taking his one niece to an overnight camping trip for the Girl Scouts after his sister hurts her ankle and is unable to go.  Lucky for Marty he doesn't have to spend the night in the woods with a bunch of girls because he is sent on a rock finding errand and stumbles over a dead body !!  Unfortunately Marty discovers that he knows the deceased.  Larry is one of his poker playing buddies and also an engineer.
In the first book in this series, Uncle and Ants, we got to see how Marty's mind works and we met Sergeant Mace Jackson who Marty has on speed dial and thinks that he and Mace are a team.  Well that fun continues in Chutes and Ladder when Marty, again, gets involved and won't stop.  And when his cousin Samantha's friend dies after a skydiving accident, Marty knows there is something up and will stop at nothing to do what HE thinks he does best and do some "investigating"......
You will LOVE the way Marty's mind works and how he "justifies" what he is doing for the police.  You cannot help but want to continue reading to see what is going to happen next because you know if it involves Marty, you are not going to want to miss it !!  And even though it is a book and you are reading it, you won't be able to stop yourself from reading one more page or one more chapter until you are at the end and can sit back and breath again ....because Marty will have you sitting on the edge of your seat holding your breathe hoping things work out !!!