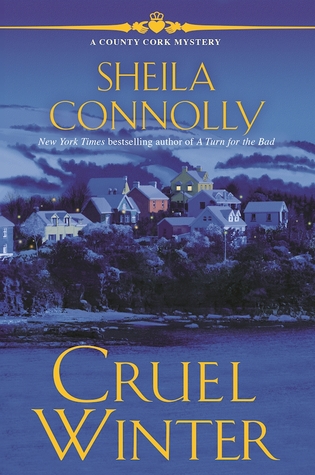 Snow is a rarity in Maura Donovan's small village in County Cork, Ireland, so she wasn't sure what to expect when a major snowstorm rolled in around Sullivan's pub. But now she's stranded in a bar full of patrons--and a suspected killer in a long-ago murder.Maura’s been in Ireland less than a year and hasn't heard about the decades-old unsolved crime that took place nearby, let alone the infamous suspect, Diane Caldwell. But the locals have, and they're not happy to be trapped with her. Diane, meanwhile, seeks to set the record straight, asserting her innocence after all this time. And since no one is going anywhere in the storm, Maura encourages Diane to share her side of the story, which she’d never had a chance to do in court.Over the next few hours, the informal court in Sullivan’s reviews the facts and theories about the case--and comes to some surprising conclusions. But is it enough to convince the police to take a new look at an old case? A clever spin on the classic locked room mystery, Cruel Winter, the fifth in New York Times bestselling author Sheila Connolly's series, will delight fans of the Emerald Isle.  (Summary via Goodreads)


Cruel Winter is the fifth book in Sheila Connolly's County Cork Mystery series.  And even though I have not read the previous ones, I was able to enjoy the story completely.  And what a story it was !!

First of all it is set in Ireland and I love stories from there.  In Ireland everything seems so relaxed.....even talk about a 20 year old cold case murder.  Maybe because the story takes place in a pub and everyone is enjoying a pint and even though they are about to receive a snowstorm that will prevent anyone from traveling, there is still a calmness while you read it.

Maura has been in Ireland for less than a year.  She grew up in Boston with her grandmother but traveled to Ireland to settle her grandmother's affairs and in doing so she inherited a cottage and pub.  The cottage and pub were owned by a friend of her grandmothers that had no one to leave them to.  So Maura stays in Ireand longer that she expects trying to learn the ins and outs of owning a pub.

In Cruel Winter Maura and friends are preparing for a snowstorm.  Snow is a rarity there and Maura has no idea what to expect.  They prepare as best as they can and as the snow falls, there is a lively bunch left standed at the pub.  Maura and her few employees try to maintain business and keep everyone warm.

Eventually it comes out that one of the individuals is Diane Caldwell.  Twenty years ago she was a suspect in her neighbors violent murder even though there was no evidence supporting that theory.  Diane still claims her innocence but not everyone in the pub believe her.  When it is also learned that one of the individuals was a gardai (policeman) on the case Maura talks eveyone into re-examining the case and see if there was something missed when it happened.

So while they are snowed in with no electricity, limited food and a fireplace for heat, the group come together and review the facts.  Is it possible that they may solve an old cold case before the power returns ??  Or did Diane really do it ?  What will happen if she is found to be guilty ??

I loved Cruel Winter !!  Even though the entire story taks place within a matter of 2 days, there is so much going on.  I was so engrossed in the story that my imagination was wide open......I could see the pub, the fireplace, the people......  I LOVE books like that and if you do also, you gotta read Cruel Winter !!!