Bed and Breakfast and Murder (Fiona Fleming #1) by Patti Larsen 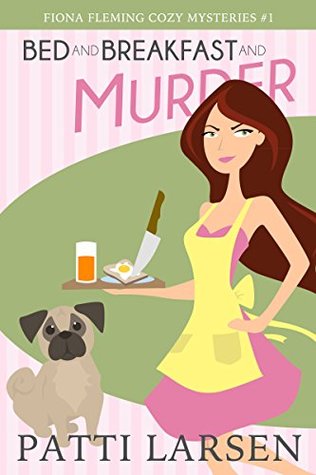 I tried not to look down the mouth of hell staring back at me from inside the glaringly pristine outer ceramic shell of the white throne, my throat catching, stomach doing half flips and a rather impressive rollover routine that would have gotten at least a 9.5 even from the Russian judges. Instead, I forced myself to smile and swallow and remind myself the elbow length yellow rubber gloves grasping the handle of the standard issue plunger were all that stood between me and Pooageddon.

Suck it up, Fee. Big girl panties and adulting and all that.

"At what point," I waved the dripping plunger, wincing as droplets of yuck flew, "did I think owning a bed and breakfast was going to be glamorous and romantic?"Fiona Fleming hasn't lived in Reading, Vermont in over a decade, her escape from small town living leading her to New York City and a life of adventure. An adventure that has left her with no career, an ex who cheated on her and zero plans for the future. Her grandmother's death grants her a new chance--inheriting Petunia's, Iris Fleming's bed and breakfast, seems like the ideal fresh start. But when Fee finds out ownership of the property Iris willed her might be in question, she's drawn into the seedy underbelly of the cutest town in America after being singled out as the main suspect in a murder.  (Summary via Goodreads)

The main character, Fiona, moves back to her home town when she inherits the Bed & Breakfast her grandmother owned.  However only a few weeks into owning the B & B, she is delivered papers stating that her grandmother signed over ownership to a Construction company and she is given 48 hours to vacant.  Before she can even process this new information the owner of the Construction company is found dead in the koi pond in Fiona's backyard.  Seeing as Fiona's dad is the retired Sheriff of the town, she tries to solve the case.  Unfortunately Fiona is  unsure of her father's innocence.

While running the B & B Fiona tries to find out who killed Pete and why in her backyard.  And why would her grandmother sign over ownership of the B & B after it was willed to Fiona.  As Fiona tries to get answers for all her questions, she uncovers a lot more than she bargained for.......  And when all the questions are answered, you will be blowed away at who was actually the mastermind of it all !!!