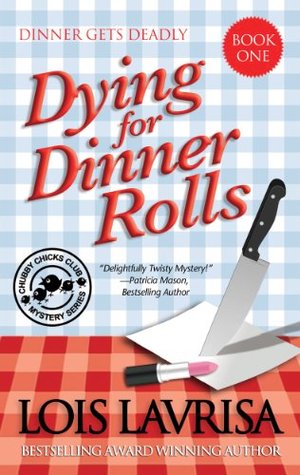 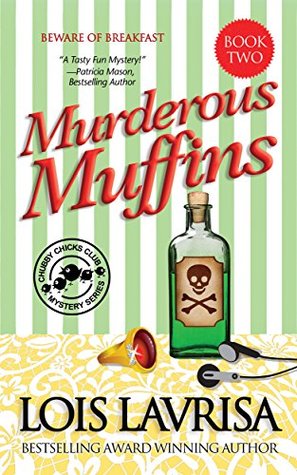 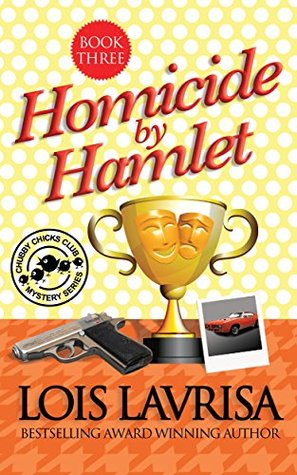 I am very glad that I waited until I read all three books in the Chubby Chicks Club Mystery Series by Lois Lavrisa before posting any reviews.  The books are between 155-165 pages long which makes for quick reading. And when you add the interesting story you are done before you know it....or want to be.  The books are centered around The Chubby Chicks Club which is really not a "club" or are they chubby chicks.  There are four "members" each very unique.  First you have Cat who is a happily married mom of two sets of twins and her family owns the Sunshine Market.  Bezu is a southern belle living in her generations old family home where the group always meets for dinner.  Annie Mae is a drama professor at the local University and lastly is Jose who is a bomb squad detective resembling Dwayne "The Rock" Johnson.
There was a 5th member, Lucy, but as you will see in Book One she isn't around long.
Another thing I loved about these books is that each book is written in a different narrative.


DYING FOR DINNER ROLLS ( BOOK ONE )


She's been held at gunpoint, stuck in a burning dumpster, chased out of a grocery store, caught impersonating a police officer and almost run over by a wayward vehicle. How is that for a first day on the job as an amateur sleuth? Along with her friend Annie Mae, Cat investigates the brick-paved, oak-lined streets of Savannah to find their friend's murderer. To say the very least, it is not smooth sailing for these self appointed detectives. Will they catch the killer before the killer gets them? Or will their first case be their last? Find out in the first volume of the Chubby Chicks Club mystery series, Dying for Dinner Rolls which combines mystery, suspense, humor, and southern charm.   (Summary via Goodreads)

Cat has everything...a loving husband, 18 year old twin boys, 5 year old twin girls, a family business started by her parents years ago, a great mother and grandfather.  The only thing wrong in her life is that her father's murder has not been solved.  Her father was gunned down during a robbery at the store and the only "clue" was a crossword puzzle with a few incorrect words filled out in purple ink.  And now Chubby Chicks Club member Lucy is found murdered in her home and the police rule it a suicide.  Anyone who knew Lucy knows that there is no way she would take her own life.  With the unreluctant help of Annie Mae, Cat does some investigating into Lucy's death.  As they get closes to the killer, Cat begins to learn things about her father.   Is it possible she could solve BOTH cases ??

Bezu is a beautiful southern belle with gentile manners. But her problems are anything but. Deep in debt, she's illegally taken in a few lodgers. A sweet stripper and her bodybuilder boyfriend, an Asian man loudly learning English through pop music, and a mysterious stranger with the most amazing blue-green eyes -- and a secret. When one of them mysteriously dies and it looks like her muffins were the murder weapon, Bezu and her fellow Chubby Chicks Club member, Cat, must discover who the killer is before she ends up in jail...or worse. Will they succeed? Find out in Murderous Muffins, book two in the Chubby Chicks Club cozy mystery series.  (Summary vis Goodreads)

The Gordon family once owned half the town but the only 2 things that Bezu has left of her family is the family home and the pearl necklace that has been handed down from generations.  The house is falling apart, the taxes are past due and she needs money.  So she illegally takes in "tenants" but to everyone else they are relatives, very distant relatives.  But when Cat needs a place to stay for a few days and one of the tenants dies, poisoned by a muffin Bezu made, all hell breaks lose at the inn.  Bezu has to come clean to Cat and Jose, try to ward off advances by the Brazilan hottie who is staying there because he may be the killer and clear her name.

Annie Mae has one last job to do before she retires from a thirty-year career in academia: one week of summer theater camp. A camp she has worked at for so many years she could do it with her eyes closed. Easy peasy. Until a team leader is murdered and all hell breaks loose as everyone is a suspect and everyone has a secret. Will she find out the truth before she becomes the killer’s next victim? Or will death be her swan song?  (Summary via Goodreads)

Annie Mae loves the students and her job but it is time for her to retire and start the next chapter of her live.  And she will do that right after she leads a team of drama students in a week long summer theatre camp competition.  Her team has a winning streak that she would like to retire with, however, Priscilla Woodham, is also a team leader and the two of them do not get along !!  The first day Priscilla starts trouble questioning Annie Mae's "relationship" with one of the judges Professor Gill.  All Annie Mae wants to do is get through the week without any trouble.  Unfortunately nothing is that easy.  They find out that Bezu's ex-fiance, Dwight, is marrying Priscilla, Priscilla is found dead the evening of the first day, Professor Gill left a dinner party early and there is something about Priscilla's assistant that Annie Mae can't put her finger on.  Even though the police are hot on the case, Annie Mae and Bezu feel it is up to them to solve the case.  After all Annie Mae needs to know if her "friend" is innocent before she develops feelings for him.

As I said I really liked that each book was written in a different narrative.  First we got to ride along with Cat, then Bezu and finally Annie Mae.  I am so hoping that Book Four will be in Jose's narrative....that story should be a hoot !!!!

These books with fly off your TBR pile and on to your friends or back to the library quick !!!  I couldn't and didn't want to put them down !!!