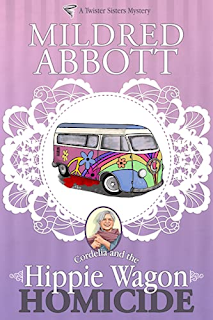 Cordelia Davis lives with no regrets, despite her life changing drastically a half century ago when a tornado altered the destiny of the little Ozark town of Willow Lane. The town grew back stronger and more beautiful, and Cordelia, her sister, Pamela, and her best friend, Wanda, built a life to treasure.As Willow Lane honors the memory of those lost and celebrates all that has been achieved, tragedy refuses to remain in the past. News of murder rocks the pastoral countryside when Cordelia discovers a body on her farm, beneath her beloved willow tree. And while the police make an immediate arrest, Cordelia finds herself untangling a web of lies and long-ago secrets.With suspects in every nook of her cozy town—and an old flame knocking on her door—it will take all Cordelia’s tenacity to face the past and to weather the mysteries of Willow Lane.  (Summary via Amazon)

You know how when talking about real estate, everyone says location, location, location.....  Well when people discuss the Twister Sisters Mysteries series by Mildred Abbott the main word they should be using is secrets, secrets, SECRETS !!!

Hippe Wagon Homicide is the first book in this series and it sets the stage beautifully !!!  Before you even start reading this book Abbott has provided family trees for the three main characters, Cordelia, Wanda and Pamela as well as a map of the main part of the town and where this first book focuses on.

In Hippe Wagon Homicide the town of Willow Lane is getting ready for the 50th year anniversary of the tornado that damaged the town and left 22 residents dead.  The town is getting ready to remember that time as well as the people they lost and and have a gathering at Cordelia's farm.  Unfortunately the next morning when Cordelia goes to the area by the willows where the party was held she finds youth pastor Jim Asher pinned between her favorite willow tree and her volkswagon hippie van and hes dead.  It is obvious that someone murdered Jim but who would have wanted to kill a youth pastor and so violently ?

Cordelia starts asking a lot of questions.....mainly because it happened on her property and included her vehicle but also because this was her community and she loves her town and its residents and could not tolerant a murderer walking around freely.  Little does she know that by asking questions she is about to uncover a town full of secrets and it looks like some secrets are so deep they are worthy of killing over !!

As you follow Cordelia around town and get to know the people of Willow Lane you will find yourself drawn to them and want to find Jim's murderer also.  You will become protective of the town and people as much as Cordelia is and you will turn those pages as fast as you can to resolve things.

Another aspect of Hippe Wagon Homicide that readers will love is the rekindling love story that Cordelia and her childhood boyfriend Charlie dance around when he returns home after being away for 50 years.  And you will giggle like a sixteen year old when you read about them getting to know each other again and realize that they still have feelings for each other.

Hippie Wagon Homicide is the perfect first book in the Twister Sister Mysteries series as it introduces you to the town and people of Willow Lane and allows you to fall in love with them and want to return to the town as soon as you can.  Abbott provides a nice arrangement of people with just the right amount of mystery and intrigue to insure that you will be a fan !!!