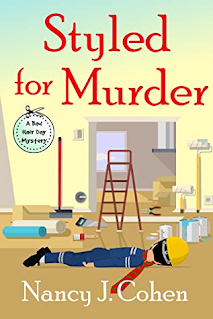 A dead body in her mother’s bathroom during a home remodel leads hairstylist Marla Vail to flush out the clues and nail the killer.When hairstylist and savvy sleuth, Marla Vail, gets a frantic call from her mother that there’s a dead body in her shower, Marla realizes this wasn’t part of the home renovation plans. The victim turns out to be the project manager, who had an untrustworthy reputation in town. Disgruntled customers, unpaid suppliers, and the design company’s staff are among the suspects. Which one of them wanted the foreman to pipe down about their shady dealings?Meanwhile, the lead investigator sets his sights on Marla’s stepfather, Reed, who’s keeping secrets from his family. Reed has a past connection to the victim and won’t come clean about what he knows. As Marla drills deeper, she’s showered with suspicions, but nobody’s willing to leak any information. She needs to hammer down the prospects, or time will drain away and the murderer will strike again.To flush out the culprit, Marla taps into her pipeline of resources. Can she assemble the clues and demolish the alibis to nail a killer? Or has someone designed the perfect murder? Recipes Included!  (Summary via Goodreads)

Even though I haven't read all of the books in the Bad Hair Day Mystery series by Nancy J. Cohen I am a huge fan and couldn't wait to dive into her latest.....Styled for Murder is the seventeenth book in this series.

In Styled for Murder main character Marla Vail and her detective husband Dalton are trying to get use to their lives as new parents to their son Ryder.  Dalton has a daughter, Brianna, from his first marriage but it's been a while since he had to change diapers and all.  They are both also busy with their jobs.  Beside being a new mom Marla owns a hair salon and day spa and dabbles in solving murders.  And when a dead body is found in the bathroom her mom and husband Reed are having remodeled, Marla has to jump in and look into his murder.

While Marla looks into the death of the project manager, she uncovers a lot of people who aren't going to miss him.  Unfortunately the list of suspects is a long one and the detective on the case has his sights on Marla's step father, Reed.  Even though Marla is trying to help him, Reed is keeping to himself and not talking to anyone.  And Dalton is not able to get much information as the case is not in his jurisdiction.

Readers will love any and all of the books in this series.  You can start at the first book and work your way through or grab any book and you will catch on pretty quick and fall in love with everything this series has to offer.  You will love the relationships throughout the books, the jobs that everyone has and you will want to hang out with Marla everywhere she goes !!!