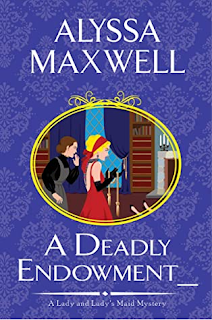 Set among the landed gentry of post-WWI England and perfect for fans of Downton Abbey, Alyssa Maxwell’s latest historical mystery finds sleuthing duo Lady Phoebe Renshaw and her lady’s maid, Eva Huntford, hunting a killer after the decision to open Foxwood Hall for guided tours turns deadly...To make ends meet, Lady Phoebe Renshaw and her lady’s maid, Eva Huntford, have decided to open up Foxwood Hall to guided public tours. Not everyone is pleased about it—even to the point of committing murder…The lean times following the Great War continue to require creative solutions for England's noble class. But Lady Phoebe’s proposal to open up the Renshaw estate to guided tours for additional income strikes many in the family as a “vulgar enterprise.” Phoebe’s grandfather, the Earl of Wroxly, however, reluctantly concedes the necessity.Their first tour group consists of members of the Historical Society, a magazine writer, and a flock of students. It’s a large group for Phoebe, her sister Amelia, and Eva to manage, and when the widow Arvina Bell goes missing, Eva goes in search of her—only to find her in the library, strangled with a silken drapery cord.The schoolchildren are promptly sent home, but the members of the Historical Society—many of whom also wandered off at times—remain for interrogation. There is also, curiously, a framed photo missing from the library. As the police hastily zero in on a suspect, Phoebe and Eva weigh the clues. Does the crime have to do with rumors of hidden treasure at Foxwood Hall? But they must make haste to solve the widow’s murder—before someone else becomes history…   (Summary via Goodreads)

It's always a treat to escape into one of Alyssa Maxwell's book and A Deadly Endowment is a fast paced, exciting and exhilarating read !!  And with it being the seventh book in her Lady & Lady's Maid Mystery series not only should you feel like a part of the family but you will love traveling back in time.  If this is the first book you are reading in this series, don't worry... you will catch on quick enough.
In A Deadly Endowment Lady Phoebe has persuaded her grandparents, the Earl and Lady of Wroxly, to open their home, Foxwood Hall, to the public for scheduled tours of the property for a small fee.  Even though they are hesitant, they agree as long as the guests are supervised at all times.  Unfortunately their first scheduled tour turns into a huge disaster when Lady Phoebe and her maid Eva are unable to keep track of everyone at all times and one of the guests is found murdered in the library !!
As Lady Phoebe and Eva take investigative matters into their own hands as they are use to doing when something like this happens, they find that most of the people that were on that tour have a lot of secrets.  Members of the local chapter of the Historical Society as well as a magazine writer are at the top of the list of suspects when Arvina Bell is found murdered in the library.  Arvina was a member of the Historical Society and was with her son on the tour.  The authorities take the son in for his mother's murder but when he is let go, Lady Phoebe and Eva begin to look into the others in the group.  Unfortunately every time they think that they are getting close to crossing someone off the list something else happens and they are still left with a long list of suspects.
The murder at the estate isn't the only thing that the Renshaw family has to deal with....after the murder eldest granddaughter Julia feels that she and her son are no longer safe there so she takes him and goes to the estate she inherited when her husband died.  She takes along the youngest granddaughter, Amelia, but the family soon learns that Julia left Amelia at Lyndale Park and her whereabouts are unknown.
Unfortunately Lady Phoebe and Eva cannot do anything much about finding Julia knowing that if she doesn't want to be found, they won't find her until she is ready to let her whereabouts known.  So they set their sights on looking into Arvina's death and the secrets within the Historical Society.
I don't know how to prove it but I think that Maxwell has a time machine and can travel back in time to the era that she writes about.  She is so knowledgeable in that time frame that she has you convinced that you are there as well.  She describes everything so well that you will see it vividly in your mind.  It is such a vivid picture that you will want to stay there as long as you can even if there is a murderer running around and you may not be safe.......
Review by Missi M.