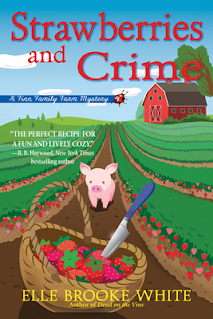 In Elle B. White's delightful second Finn Family Farm mystery, farmer Charlotte Finn and her sleuthing baby pig are neck-deep in strawberries and crime.Things are finally growing smoothly on the Finn Family Farm. With the help of caretakers Joe and Alice Wong and farmer Samuel Brown, Charlotte Finn is starting to feel at home at the Santa Barbara County produce farm she inherited. But all is not strawberries and cream: A blight is destroying young berry plants. Worse, another mysterious death is shaking Little Acorn.The victim is grizzled, cantankerous Linc Pierce, the only farmer in Little Acorn whose strawberry crop was fruitful. Charlotte and her old friend Beau Mason find him hanging from the rafter, an apparent suicide. But a cursory search turns up a half-eaten sandwich. Who eats before he kills himself?Chief Goodacre suspects foul play. Her prime suspect is Beau, who exchanged words--and worse--with Linc earlier in the day. Meanwhile, Little Acorn's farmers point accusing fingers at one another, recalling Linc's suggestion that someone sabotaged their strawberries. As Charlotte searches for clues to exonerate Beau, she finds something on Linc's workbench not buried in dust. Could this be why Linc's strawberry plants are alive? And, perhaps, why Linc is dead?Now, if Charlotte and Horse--the farm's baby pig with a bottomless stomach and an insatiable hunger for sleuthing--can't root out the murderer, they, too, may end up dead and berried.  (Summary via Goodreads)

I fell in love with the first book, Dead on the Vine, in the Finn Family Farm Mystery series by Elle Brooke White and couldn't wait for the next book and it is finally here !!  Strawberries and Crime is full of entertaining stories and lovable people and a farm and community that you will want to be a part of !!

Charlotte Finn is the main character in this series and she has inherited her great-uncle's farm in Little Acorn.  Not only did she inherit the farm but the people and the animals associated with it are her responsiblility as well....and one animal in particular she couldn't get rid of no matter what....and that is Horse, her trusty companion and all around know-it-all protector the pig.

In Strawberries and Crime the farm is alive with activity as Charlotte's childhood best friend Diane is building and working on opening a farm to table restaurant on property on the farm and everyone is doing whatever they can to help.  Unfortunately Charlotte is pulled in a different direction when some of the strawberry crop starts dying and she finds out that hers isn't the only farm having this trouble.  Then when her and Beau, Diane's brother as well as Charlotte's dear friend, meet up with some other farmers and there's an argument between Beau and another farmer, Linc, things go downhill quickly.  And when Beau and Charlotte go to Linc's farm to apologize, they find him dead hanging in his barn.  It doesn't take Chief Goodacre long to realize that it was murder and the murderer staged it to look like suicide and Beau was the last person to have a confrontation with him.

Even though Charlotte should be tending to her strawberry plants and helping Diane get the restaurant ready to open, she is pulled into looking into Linc's death....she has to for Beau's sake.  With the help of Horse and friend and farmhand Samuel, they decide to find out who would benefit from damaging other farmers crops and getting rid of Linc.   Luckily Beau is taken off the suspect list early in the investigation, however, Diane's contractor Danny is taken in for Linc's murder.  Diane and Danny have been getting to know each other on the personal level and she knows that even though he has a temper, he wouldn't have harmed Linc.

Charlotte, Samuel and Horse work as a team looking into Linc's murder but it seems the suspect list gets longer rather than shorter and they seem to be fighting an uphill battle......

Readers will LOVE this series with the unique characters.....especially Horse the pig and the relationship that he has with Charlotte.  Readers will love the setting and want to move to the farm to partake in all the fun....but I'm sure you will want to steer clear of the murder...if you can help it !!!