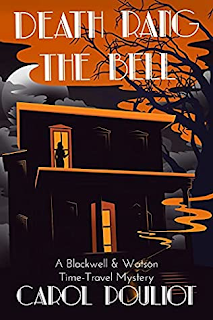 21st-century journalist Olivia Watson thinks travelling back in time to 1934 to attend a Halloween party with her friend Detective Steven Blackwell will be a lot of fun. And it is...until she witnesses the head of the Shipley Five-and-Dime empire murdered, and fears the killer saw her face.The smart move is to return to the safety of the present, but Olivia possesses a secret and is about to defy the unwritten rules of time travel. She convinces Steven to let her stay in his time and help unravel the motives behind the murder, even if it means risking her own life to save another.When Steven delves into the investigation, he discovers how a bitter relationship, a chance encounter, and a fateful decision converged to set the stage for murder. In a maze full of unreliable clues and misdirection, dark secrets refuse to stay buried and forgotten ghosts won’t fade away. Steven is reminded that old sins cast long shadows.Can Steven catch the killer before time runs out for Olivia?  (Summary via Goodreads)

The Blackwell and Watson Time-Travel Mystery series by Carol Pouliot is a fun and different series with one character living in the 1930's and the other living in the present time.....however in this third book, Death Rang the Bell, Pouliot adds another twist and goes back to the early 1900's to bring the story together.

In the Blackwell and Watson Time-Travel Mystery series Olivia Watson is a journalist and has her own research business in the present time and Steven Blackwell is a detective in the 1930's.  They found out that they can travel back and forth between times by holding hands and crossing over the threshold of Olivia's bedroom which in Steven's time was his mother's bedroom.

In Death Rang the Bell Olivia is spending more and more time in Steven's time.  Unfortunately neither of them thought that Steven's neighbor, Benjamin Shipley, would get murdered and Olivia would be an eye witness.   As Steven and his department investigate Shipley's murder, the suspect list seems to grow as they get deeper into Shipley's family's past.  And when they find out some things from 20 years ago that could have a major impact on the case, this will make things more interesting as well as more complicated for Steven and his crew to figure out.

In this installment in this series, the majority of the time is spent with Steven and his case and I think readers will enjoy their time there.  Readers cannot help but enjoy the relationship that Steven and Olivia are developing as well as reading how each of them is amazed when they cross over into the other's time period.  Reading about how the police do their jobs back in the 1930's as opposed to now and all the differences is eye opening to say the least.....and the amount of control that Olivia has with not going online to look into the events to help Steven solve the case will amaze readers....I don't know about you but I would be totally tempted to peek.

I highly recommend taking a trip into the past with this series.  You will fall instantly in love with everything this series has to offer......