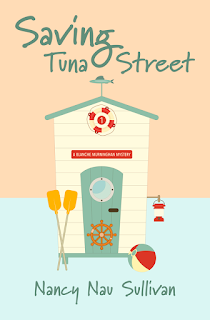 Blanche “Bang” Murninghan is a part-time journalist with writer’s block and a penchant for walking the beach on her beloved Santa Maria Island. Gran left her a cabin on Tuna Street, and she’s got her friends and family--her itinerant cousin, Jack, and Cap, a lovable old fisherman who coddles her like a grandfather, and her friend, Liza, a realtor who looks like she emerged from central casting. All is well. Until the land-grabbing goons arrive from Chicago. Blanche finds herself in a tailspin, flabbergasted that so many things can go so wrong, so fast. Her friend, Bob Blankenship, Liza’s partner, is found murdered in the parking lot of the marina, and she suspects the slick, handsome land developer Sergi Langstrom and his company of chaos are behind it all. Blanche keeps digging. All the way to hell. The goons, it seems, are a front for a drug cartel.The harder Blanche pushes against the source of trouble, the more she is sucked into the vortex of greed, murder, drug runners, and kidnapping (hers). The appearance of the mysterious Haasi, a tiny Native American with glossy braids and dark eyes, complicates things, and it’s a good thing. She appears and disappears but always ends up at Blanche’s side. They all keep getting closer to the sources of the spurious land development and the murder and the drug running. Who can look away? It’s like watching a hurricane, which, literally, comes straight for Tuna Street.   (Summary via Goodreads)

In Saving Tuna Street Blanche is trying to save her street, Tuna Street, her home, her island as well as try to solve a murder .... oh and stay alive.  Developers are trying to move into one section of the island which includes Tuna Street to build big mansions and shopping centers.  Everyone is up in arms over this including realtor and friend Bob Blankenship who states at the town meeting that the developers would get the required permits over his dead body.  Sadly the next day Bob is found in his car in the parking lot with his neck broken.  Bob's business partner and Blanche's best friend Liza is torn up over it and wants to see justice for Bob.

Blanche cannot seem to catch a break when Hurricane Wilma hits the island and does a lot of damage to her cabin.  Luckily for her she can move in with dear Cappy who is like a grandfather to her and her cousin Jack.

Blanche works part-time for the Island Times newspaper so she starts writing serious articles about the developers and the bad that they will be doing to the island if what they are proposing goes through.  Unfortunately Blanche does not know that her cousin Jack who lives in Chicago is involved with the same developing people and what they are really involved in.

When Blanche ends up hurt and Jack comes clean on his involvement with everything, Blanche teams up with Liza and Haasi, her new found cousin, and go against Police Chief Duncan's warning to stay out of it.  They have to save their island and find out who killed Bob....no matter what !!!

Readers will be swept away in this book... powerless to stop reading !  You will be so into the story that you will feel the heat from the sun and feel like you have sand in your toes.  You will not want to leave Tuna Street.  But luckily you won't have to be gone long because this is the first book in the series and Sullivan teases of plenty more adventures to be had with Blanche.