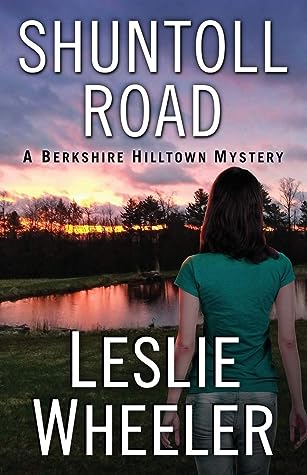 It's June in the Berkshires, a beautiful month when everything is lush and green. Bostonian Kathryn Stinson returns to see if she and New Nottingham local, Earl Barker, can rebuild their romantic relationship. She's barely arrived when New York real estate developer, Niall Corrigan, takes over the property she's been renting with plans to turn it into an upscale development.

Kathryn's opposition to the development pits her against Earl, offered the job of clearing the land. Amid escalating violence, a fire breaks out in the woods and the burned body of another opponent is discovered. Did he die trying to escape a fire he set, or did someone else start the fire to cover up his murder?Other questions swirl around Corrigan's connection to Kathryn's new friend, Gwen Waite. The happily married wife of a local, Gwen is a role model for Kathryn. But is Gwen's marriage truly happy? And what was the mysterious "accident" that caused Gwen to flee New York years ago? Kathryn's search for answers puts her in grave danger.  (Summary via Goodreads)
Shuntoll Road by Leslie Wheeler is the second book in the Berkshire Hilltown Mystery series.  Rattlesnake Hill was the first book in this series and it was quite intense and Shuntoll Road follows suit.
In Shuntoll Road main character Kathryn Stinson returns from Boston to the house she is renting in the Berkshires for a two week long vacation.  Kathryn first came to the Berkshires ( in Rattlesnake Hill ) to solve a family murder, which she did plus a recent one, and she fell in love with the area and a local, Earl Barker.
On her way into town she receives a call from the realtor of the house she is renting saying that a New York City developer who is interested in the property will be in town surveying the property during her vacation.  Little does she know that this New York City developer and some of the locals have a past history that could cause some problems if it was told.
Kathryn wants nothing more than to enjoy her vacation.  She wants to see where her and Earl's relationship is headed and if they have a future together.  Unfortunately when the developer makes the downstairs of her house an office and hires a security guard and dog and positions them in a trailer on the property, Kathryn is no where near relaxed.  And when it is rumored that there may have been a codicil to the original will left about the property that could save the property from the developer, Kathryn searches high and low to find it.
Kathryn also learns that Niall Corrigan, the New York City developer, knew a few of the locals years ago when  they were young and living in the city.  However Gwen, the local librarian who is married with 2 kids, would like to forget that earlier time in her life.  But when there is a fire in the woods behind Kathryn's house and a dead body is found, there are more questions than answers and Gwen may not be able to keep her secret a secret any more.
Even though Kathryn is not a local and has only been part of the Berkshires for a short time, the town and the people have a pull to her and she will do whatever she can to protect it and them.  And when she learns about Gwen's secret, she will do whatever she can to protect Gwen and her family.
Readers will be on the edge of their chair reading Shuntoll Road and if you have read Rattlesnake Hill, you know that spot already.  These books will become a part of you while you are reading and you will be there next to Kathryn doing whatever is necessary to protect the town and its people.  You will fall in love with everything about these books.
Review by Missi M.
Posted by Cozy Mystery Book Reviews at 05:37