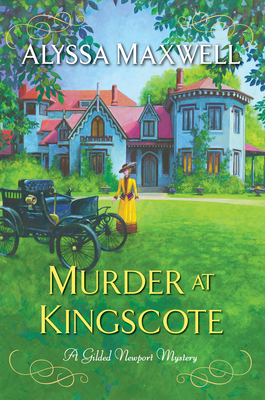 On a clear July day in 1899, the salty ocean breeze along Bellevue Avenue carries new smells of gasoline and exhaust as Emma, now editor-in-chief of the Newport Messenger, covers Newport's first-ever automobile parade. But the festive atmosphere soon turns to shock as young Philip King drunkenly swerves his motorcar into a wooden figure of a nanny pushing a pram on the obstacle course.That evening, at a dinner party hosted by Ella King at her magnificent Gothic-inspired "cottage," Kingscote, Emma and her beau Derrick Andrews are enjoying the food and the company when Ella's son staggers in, obviously still inebriated. But the disruption is nothing compared to the urgent shouts of the coachman. Rushing out, they find the family's butler pinned against a tree beneath the front wheels of Philip's motorcar, close to death.At first, the tragic tableau appears to be a reckless accident--one which could ruin Philip's reputation. But when Emma later receives a message informing her that the butler bullied his staff and took advantage of young maids, she begins to suspect the scene may have been staged and steers the police toward a murder investigation. But while Emma investigates the connections between a competing heir for the King fortune, a mysterious child, an inmate of an insane asylum, and the brutal boxing rings of Providence, a killer remains at large--with unfinished business to attend to . . .   (Summary via Goodreads)
Murder at Kingscote is the eighth book in the Gilded Newport Mystery series by Alyssa Maxwell and I have to say I believe this is my favorite one of this series.....so far.  I have had the pleasure of reading all of the books in this series and have fallen in love with everything about it.  Readers cannot help but love and admire the main character, Emma Cross, everything she does for herself and others and everything she stands for.
The Gilded Newport Mystery series is set in the late nineteenth century and they are set in Newport, Rhode Island.  The series follows Emma Cross around as she is a reporter turned editor-in-chief of a local newspaper.  The newspaper is owned by Derrick Andrews who is interested in Emma for more than her reporting skills....and she likes him but fears she does not fit into his lifestyle.  Derrick and his family are rich and they belong to the "Four Hundred" group.  This is a group that is defined as the number of wealthy people that will fit nicely into Caroline Astor's New York ballroom.  (Caroline Astor was a socialite and an heiress who ruled in society during the nineteenth century.)  Emma has aunts and uncles that belong to the Four Hundred but she, herself, does not.  This, however, does not stop her from being invited to events and seen in the company of members of the group.
Not only is Emma known for her wealthy relatives and her reporting skills but she is known to help solve a murder from time to time....and in Murder at Kingscote she is again in the middle of a murder.  After Emma and Derrick attend the very first automobile parade, they are invited back to the home of Ella King for a small dinner party.  While attending dinner Ella's son, Phillip, shows up late and is drunk, and a short time later the butler is found wedged between an automobile and a tree.  Baldwin, the butler, dies a short time later from his injuries and Phillip is placed on house arrest while the police investigate.
Emma will do whatever it takes to solve a case and when she is called upon by Mrs. King to look into Baldwin's murder she enlists the help of her society journalist, Ethan Merriman to go undercover as the new butler to get to know the other servants to see what he can learn about Baldwin's murder.  Ethan and Emma also had to get Mrs. King's and Jesse, the head detective's, approval.  But having someone on the inside doesn't make it any easier for Emma to solve the case......
Maxwell always amazes me with her story telling abilities.  And to write about a time in the past when things were so different.  She writes like she actually lived during the time making readers feel like they are there also.  While you are reading this series, you cannot help but get lost in the story and the series.
Review by Missi M.
Posted by Cozy Mystery Book Reviews at 09:39