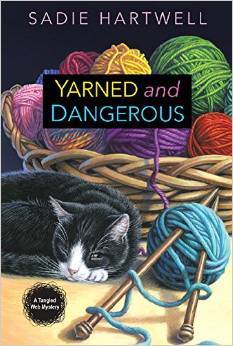 Time has not been kind to sleepy Dorset Falls, Connecticut, where an erstwhile resident is hoping to bring a tattered yarn shop back to life—but with a murderer on the loose, the whole town is in knots…
Josie Blair left Dorset Falls twelve years ago in hopes of making it big in New York City. But after earning an overpriced master’s degree and getting fired by a temperamental designer, she finds herself heading back to her hometown. Her great-uncle was injured in a car accident, and newly unemployed Josie is the only person available to take care of him. Uncle Eb’s wife didn’t survive the crash, so Josie is also tasked with selling the contents of her Aunt Cora’s yarn shop. But the needling ladies of the Charity Knitters Association pose a far bigger challenge than a shop full of scattered skeins… Miss Marple Knits is one of the few businesses still open in the dreary downtown. Josie can’t imagine how it stayed open for so long, yet something about the cozy, resilient little shop appeals to her. But when one of the town’s most persnickety knitters turns up dead in a pile of cashmere yarn, Josie realizes there’s something truly twisted lurking beneath the town’s decaying façade…  (Summary via Goodreads)

When you read a book, you want the story to take you away.  Well pack your bags ..... you are going to want to move to Dorset Falls !!

In Yarned and Dangerous, the first Tangled Web Mystery series, Sadie Hartwell takes you to Dorset Falls with Josie Blair.  Josie goes there to take care of her great-uncle Eb and to close Aunt Cora's yarn store.  As Josie tries to help Uncle Eb who has a cast on his leg from the car accident that killed Aunt Cora and before she can take inventory of the contents of the yarn store, she finds a woman dead in the storeroom.  It turns out to be one of the woman she recently met that was a member of the Charity Knitters Association.

With the help of another member of the Association she begins taking inventory of the store however her heart isn't into it.  And then some strange things start happening that make Josie wonder about the people in this small town.

Hartwell has made a great character out of Josie you cannot help but fall in love with her.  And you will even find a place for her grouchy Uncle Eb along with everyone else in town.  You will instantly want to have coffee at the general store and stroll along Main Street even though there aren't a lot of businesses on it.

Dorset Falls has something for everyone so find a comfy spot to sit, grab a beverage and a snack and settle in with Yarned and Dangerous.  I was so engrossed in the story that I read it in one day.  That is not required or recommended....take your time and rest assured.....there is a second book in the series, A Knit Before Dying and I am dying to read it !!!