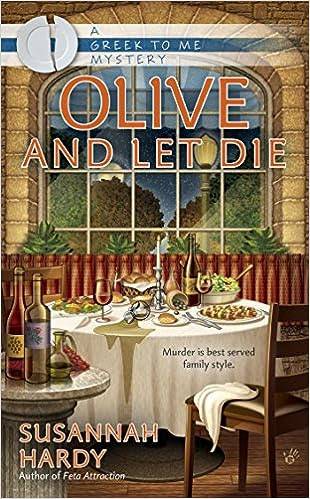 The second Greek to Me Mystery from the author of Feta AttractionAs manager of the Bonaparte House, a historic landmark and Greek restaurant in upstate New York, Georgie Nikolopatos knows her local legends—and her traditional Greek recipes are to die for.Between her soon-to-be ex-husband Spiro coming out of the closet and her budding romance with Captain Jack Conway, Georgie’s life is beginning to feel like a soap opera.  And that’s before a surprise visit from her estranged mother Shirley, better known as soap star Melanie Ashley. But the dramatic family reunion takes a chilling turn when another long-lost relative turns up dead.Just outside Spiro’s new restaurant, Georgie and Melanie find the body of Doreen Webber—a cousin Georgie never knew she had. With Spiro’s partner Inky on the list of suspects, Georgie begins to wonder what else her mother may be hiding. Is the dead-broke diva capable of murder?  She’d better find out before someone adds a new twist to the family plot.Includes delicious Greek recipes! (summary via Amazon)

Susannah Hardy is the Debbie MacComber of cozy mysteries but also with a murder or two.  Hardy writes about a small, close knit tourist town with lovable characters, restaurants you want to dine in, shops to shop in and a Spa on an island in a castle.  Susannah Hardy had me with Feta Attraction, the first book in her Greek To Me Mystery series but Olive And Let Die blew me away ! ! !  Hardy has such a talent in her writing that you are swept into the book from page one.

In Olive and Let Die you get to know Georgie and her "family" better, some of which she didn't even know existed and one that has always been there right under her nose.  When her soap opera star mother returns to town after a very lenghty absence, the town turns into a real life soap opera.  As Georgia tries to find out the reason for her mothers sudden, secretive return, they stumble across a dead body.  As she tries to balance her restaurant responsibilites, spend time getting to know her new beau, Mr. Hottie Captain Jack Conway, help her soon to be gay ex-husband and his partner find a cook for the restaurant they are opening up, and try to uncover the truth behind her mothers visit, she tries to figure out the murder of her distant cousin, Doreen.

Georgie didn't even know long time resident of Bonaparte Bay Doreen Webber was a relative until after discovering her body with the mother who abandoned her many, many years ago.  Why is her famous mother in town ?  And why can't she get her mother or her annoying assistant, Caitlyn to talk about it.  Georgie knows there is something going on, especially when a friend warns her to be careful but then ends up dead before they can explain.  Is Georgie a target ?  Is her mother in danger ?  As she gets closer to finding out the truth, she unravels some long ago hidden secrets concerning a family she didn't know anything about.....her family.

If you enjoy a book that keeps you entertained throughout the entire story, a book with plenty of surprises, some twists, and a shocking ending that almost guarantees there is more to come in other book, then you need to read this book.  You will be a fan for life !!!