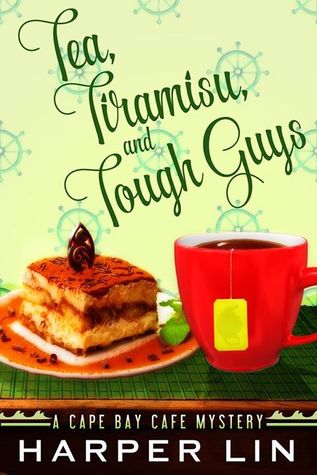 When Francesca’s old high school crush, Todd, is accused of murder, she is convinced he is innocent. The police don’t believe Todd’s story, and neither does Matty.


During the busy summer tourist season at Cape Bay, Francesca sets out to prove Todd’s innocence. Matty, however, investigates to prove Todd is guilty. Why does Matty detest Todd so much? But what if he’s right—what if Todd is a murderer?  (summary via Goodreads)

This is the first book in the Cape Bay Cafe Mysteries that I have read. I will definitely be reading book one because I loved this book two. The flow of this book was spot on with a very easy to follow plot and character development.The main character, Libby is a very strong independent woman. She owns the Antonia's Italian Cafe which she inherited from her mother who passed away.. She has grown up in this cafe and learning to make coffee since she could stand. Tea, not one of Libb's strong areas comes into play when an older English couple comes into her coffee shop and really wants a cup of tea. She brings them tea much to their dismay. It is awful compared to their English tastes and can't hide how they feel. Libby becomes obsessed with making it as good as the English. This is really a fun part of the story when she begins to get advice from the old couple on how to make it properly. She also gets a lot of help from the internet and orders every tea known to mankind. Everything in Libby's life is going ok, she is falling for her best friend Matt, her business is busy and she has great employees. What more could she need? Then walks in Mrs. D'Angelo with news of a murder. And it just so happens that it occurred in the parking lot of an old high school classmates business. So now there have been two murders in the past few months. Libby is so concerned because things like this just don't happen in Cape Bay! It is the kind of place where you don't lock your doors and now murder?? The number one suspect is a person every girl including Libby had a crush on in high school, Todd Caruthers.Libby decides she is going to help get to the bottom of this murder. But will she find the murderer before he or she finds her? What will happen to Cape Bay now that two murders have occurred in their sleepy town?The cast of characters in this book for great to get to know. I loved this book. The author has you from the first chapter through to the very end sitting on the edge of your seat. If you love Cozies with a great dog, mystery, suspense, and a little romance you will not want to miss this second book in the Cape Bay Mysteries.I received this book as an ARC as a member of a review crew. Thank you for letting me read your wonderful work Ms. Lin.