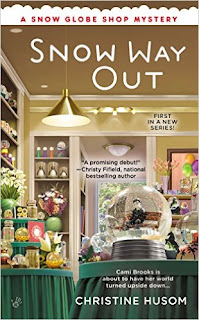 First in the series, Snow Way Out, introduces you to Cami, correction Camryn, Brooks. Camryn moves back to her hometown to help run the family store Curio Finds. Curio Finds, a nice shop filled with all different kinds of snow globes is adjacent to Brew Ha-Ha the coffee shop run by one of her best friends, Alice "Pinky" Nelson. In Brew Ha-Ha while visiting with their other best friend, Erin,

The ladies find out that lowlife Jerrell Powers who broke into Erin's home and stole a bunch of items is back in town. No one in their circle of friends like the idea that he is back, especially childhood friend Officer Mark Weston and long-time grounds keeper Archie Newberry. Both of which have a soft spot for Erin. While hosting a snow globe making class the friends are introduced to Jerrell's ex-wife, May, who is teaching the class, Pamela Hemley, Jerrell's last known girlfriend and her sister, Lauren Engle.

Things get a little heated as everyone realizes who is who but the big excitement happens after the class when Camryn is closing up the shop, finds a mysterious snow globe with a scene of a man sitting on a bench then on the way home cutting through the park stumbles across the real life version. When it is confirmed that the murdered victim is Jerrell, the Assistant Chief Clinton Lonsbury, doesnt seem to want to leave Camyrn alone. Then her circle of friends begin to exclude her and whisper behind her back making her question if they are somehow involved Jerrell's untimely death.

This book will keep you on your toes turning pages as quickly as you can read the words. I highly recommend you dig in but be careful not to shake the snow globes.....