Book Review: Death of a Bride and Groom by Allan J. Emerson 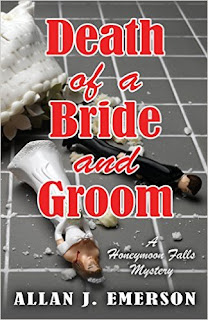 When the body of writer Iris Morland is discovered in full bridal array atop a giant wedding cake parade float, the little resort town of Honeymoon Falls is left reeling. Not only is its reputation as "the Romance Capital of the World" at risk, its very survival is threatened. Murder, it seems, has a chilling effect on those considering venues for potential nuptials.

Captain Will Halsey, head of Honeymoon Falls' three-person police force, must find the killer among Iris's host of enemies. And he'll have to do it while coping with small-town politics, feuding among his subordinates, and the ferocious attentions of the media.[via Amazon]

I love small towns. They are one of the reasons I come back to cozy mysteries more than any other kind of mysteries. The picturesque small town, where all the murder and mayhem happens always intrigues me. This was part of the reason that I adored Death of a Bride and Groom so much. It is set in Honeymoon Falls', a small town with the reputation of being the "Romantic Capital of the World". What could possibly happen here? Well the murder of Iris Morland to start with, and a lot of mayhem to follow!

From the first chapter, Allan J. Emerson captured my attention and didn't let go until I turned the last page. I loved all the host of characters that are suspects, so many of them colorful and interesting, and I had a hard time trying to pick out who the murderer was!

If you're looking for a fresh new series to enjoy over the summer, I wouldn't hesitate in recommending a new voice in Canadian mysteries. Allan J. Emerson will wow readers with this fast-paced cozy mystery, with characters so memorable that you'll be looking forward to another return to Honeymoon Falls.

Email ThisBlogThis!Share to TwitterShare to FacebookShare to Pinterest
Labels: allan emerson, book review, death of a bride and groom, reviews by anna