Feature & Giveaway: Grace Against the Clock by Julie Hyzy 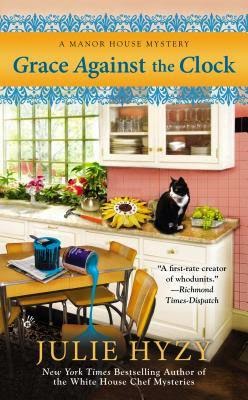 Today we are featuring a book in the Manor House Mysteries by Julie Hyzy, Grace Against the Clock.

When Marshfield Manor hosts a charity event, Grace Wheaton, the mansion’s curator and manager, is happy to lend a helping hand—until a killer makes an unwanted donation…

With the town clock in desperate need of repair, local lawyer Joyce Swedburg and her ex-husband, Dr. Leland Keay, are trying to put their differences aside to organize a benefit at Marshfield Manor to raise money to restore the beautiful timepiece. While Grace appreciates the opportunity to support such a good cause, the tension between the unhappy exes is giving her the urge to put both of the organizers in time out.

But after Leland collapses on stage during the festivities, poisoned, Grace suspects there was more going on behind the scenes. Now, she’s in a race to catch a ticked off murderer, and, if she’s going to prevent anyone else from getting hurt, every second will count…[summary via Amazon]

Today we're giving away one paperback of Grace Against the Clock.

To enter:
1. Leave a comment below with your email address. Don't want to leave a email? Email cozymysterybookreviews@gmail.com with a subject line of "Grace Against the Clock" and we will enter you.
2. We're shipping this one US/Canada only!!
3. Giveaway closes on April 22, 2015 at midnight and we will contact the winner by email.
Posted by Anna at 04:44

Email ThisBlogThis!Share to TwitterShare to FacebookShare to Pinterest
Labels: giveaway, grace against the clock, julie hyzy