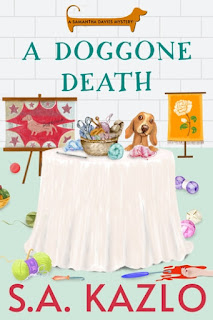 Samantha Davies and her Southern Belle cousin, Candie, can't wait to join their fellow hookers (rug hookers, that is) for the first annual Wings Falls hook-in, sponsored by her good friend Lucy, who owns The Ewe and Me Woolery. Sam is looking forward to an afternoon with her fellow hookers, the Loopy Ladies, filled with gossip, food, and buying lots of wool for her rug making projects.But what should be friendly fun turns into a deadly disaster, when Samantha stumbles upon a fellow hooker in distress—who dies in Sam's arms before help can reach her. The dead woman, Hilda Pratt, wasn't exactly beloved by all—least of all Lucy. Hilda had been copying Lucy's designs and selling them on the internet as her own. And when Sam's new boyfriend, a Detective Hank Johnson of the Wings Falls police force, determines that Hilda did not die of natural causes, Lucy and the Loopy Ladies become suspects in the woman's murder.It's suddenly up to Sam and Candie to ferret out a killer among the tight knit world of rug hooking. With her faithful dachshund, Porkchop, in tow, Sam wades through the suspects and finds Hilda had more than one enemy among those closest to her. But can Sam figure out which one is a murderer... before it's too late?  (Summary via Goodreads)
There is nothing better than curling up with a good book....but what's better is reading books in a series back to back and that is exactly what I did with the first two books in the Samantha Davies Mystery series.  Reading books back to back keeps the reader in the frame of mind on the place and people involved in the series and you will LOVE Wings Fall and the people that reside there.
Reading Kibbles and Death sets the stage nicely for readers to get to know Samantha, her cousin Candie, the new Detective Hank Johnson, his police department, Sam's adorable dog Porkchop, the Loopy Ladies, and everyone else in town....along with the main businesses.  Now in A Doggone Death readers will get to know the Loopy Ladies and their rug hooking hobby better.
When you start reading A Doggone Death Sam, Candie and their Loopy Ladies group are attending the first annual hook-in event at the fire house.  They are excited because it is being sponsored by their close friend and the one who encourages their habits, I mean hobby, Lucy.  Lucy owns The Ewe and Me with her husband Ralph and they also hold their group meetings at the store on Mondays.

After getting settled at their table at the event Sam cannot help herself, she has to check out the vendors and their tables.  But before she can get very far she overhears Lucy and Hilda, another hooker (hooker is the name they give themselves for their hobby and they love the reaction it gets when telling people) and they are arguing.  Lucy is accusing Hilda of copying her rug patterns and selling them online which is like taking money from her business.

Sam pushes the overheard argument out of her mind and begins to enjoy the event until she enters the ladies room and finds Hilda extremely sick.  She tries to help Hilda unfortunately it does no good and Hilda dies.  Sam thinks that it must have been an allergic reaction but when she overhears her new boyfriend, Detective Hank Johnson, mumble a word in his sleep, she realizes someone wanted Hilda dead.

When Lucy's husband Ralph is taken to the police station for questioning, Sam decides that she has to look into Hilda's death to save her good friends.  But once she starts digging, the hole gets very deep when she discovers that there are quite a few people who didn't like Hilda and the reasons could be murder worthy.

Sam has a tough decision to make when someone she loves more than life is injured as a threat to keep her from digging....this just fuels her determination and with Candie's help and Hank's insistence that she stops, she starts checking people off her suspect list.......