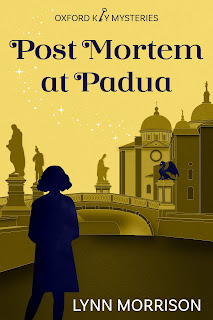 In Oxford’s newest twin city, a case of mistaken identity puts a woman’s life in jeopardyThe invitation to visit Oxford’s twin city of Padua couldn’t have come at a better time. Natalie, Kate, and Mathilde have spent weeks trying valiantly to expand Oxford’s magic, only to have every attempt end in failure. A trip to the land of pasta, high fashion, gelato, and fine wine sounds almost too good to be true.They pack their suitcases and jet off for Italy, bringing Harry and H, Nat’s cheeky wyvern, along with them. But within minutes of landing, Harry falls prey to a series of mishaps.As the danger grows, Nat wonders if perhaps Oxford isn’t the only thing with an Italian twin. Could a case of mistaken identity explain the malevolent force which has Harry in its sights?Nat and her friends follow the evidence, uncovering a decades’ old cold case with a modern day connection. Friends new and old offer a hand with interpreting the clues as the investigation spans generations.With the clock ticking, can they identify who killed Harry’s lookalike before Harry joins the ranks of the dead?If you like cozy mysteries where ghosts walk the halls, paintings come to life, wyverns play around, and magic seems within reach, the Oxford Key Mysteries are sure to delight.  (Summary via Goodreads)

Post Mortem at Padua by Lynn Morrison is the fifth book in her Oxford Key Mystery series and this will be the most magical packed one so far !!!

In Post Mortem at Padua Natalie, who is Head of Ceremonies for Oxford, and Harry, who is Executive Assistant to the Principal of St. Margaret College have been asked to travel to Italy to be on the commitee to plan a formal ceremony for the twin city agreement between Oxford and the Italy city of Padua, also known as Padova.  Upon hearing about the trip they decide to turn it into a girls trip with Mathilde and Kate.  And as luck would have it, they find a way to get Nat's cat Humphrey (who is actually a wyvern) on the plane and along for the trip.  And Kate has a friend, Lavinia who works in the university museum department who might be able to help them open a connection to the magic..... they have been trying to expand the magical field but have not been successful.  But maybe Italy is the location they require in order for that to happen.

The ladies and H arrive in Italy a few days early so that they can sightsee as well as look into obtaining the magical force.  Unfortunately while sightseeing Harry has two accidents that turn out to be deliberal acts.....involving an Eternal.....but no one can figure out who or why.  That is until they are having dinner at Lavinia's house and Nat notices an old picture and one of the woman in the picture could be Harry's twin.  They learn that it is Lavinia's great aunt and that she died in a house fire.  This send the group down a rabbit hole trying to find out who is attacking Harry and are they thinking it is Lavinia's great aunt Angelina ??

If you love magic, some a little scary but always fun, and enjoy reading about it then this is the series for you !!  I've said before but its worth repeating....if you are a fan of Harry Potter then this series is definitely for you !!  Morrison will open your eyes and mind in a way no other author can.....you may find yourself late in the night reading under your blankets with a flashlight.....

I cannot stress it enough that this is a series you have to have on your reading list !! I highly recommend inviting Nat and her crew into your life.....you will be glad you do !!!