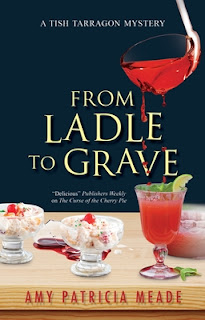 Could a body found in a graveyard be linked to a tragic murder twenty-five years ago? Tish Tarragon is plunged into a new case when a fundraising dinner in the local church hall leads to a dark discovery.Literary caterer Tish Tarragon's 'heroines of literature' fundraising dinner at St. Jude's Episcopal Church is a resounding success. But as Tish walks through the graveyard to lock up the church hall, she takes a tumble . . . over a dead body.Retired Sheriff Gadsden Carney has been murdered. Not only that, he's lying upon the Honeycutt family plot. Six-year-old Daisy Honeycutt was killed twenty-five years ago in a case that rocked Hobson Glen. Sheriff Carney was in charge of the investigation - and his murder looks suspiciously similar to young Daisy's.Tish and Sheriff Reade discover that Gadsden was looking into the Honeycutt case again. Could his death be linked to Daisy's murder all those years ago? Her killer died behind bars. Or so everyone thought . . .  (Summary via Goodreads)

From Ladle to Grave by Amy Patricia Meade is the fifth book in her Tish Tarragon Mystery series and I have to say I think that this is my favorite in this series....that is until the next book is out.

In From Ladle to Grave readers and fans will be so glad to have Sheriff Clemson Reade back in town and doing his job.  (If you remember main character Tish Tarragon had to solve a case on her own when Reade left because he couldn't handle her relationship with her boyfriend Schuyler)..... any way Reade is back, Tish is recently single, and there is a murder that requires attention.

While Tish is catering the Junior League "Women of Literature" themed fundraising dinner she stumbles across a dead body in the cemetery next to the hall where the fundraiser is being held.  When it is revealed to be retired Sheriff Gadsden Carney and he had been looking into a murder case from twenty-five years ago, there are a lot of questions.  First why would he be looking into a murder case when there was a conviction and the killer went to jail ??

To Tish's surprise Sheriff Reade hires her as a consultant for the Sheriff's office so that she can get paid while she assists in the investigation.  Now fans know that Tish doesn't need to work for the Sheriff's department as her cafe, Cookin' the Books, is successful but this gives the two of them more time together so she does it.....even though neither of them is willing to admit their real feelings toward the other....yet.

Unfortunately the twenty-five year old case that Carney was re-investigating was that of a murder where six-year old Daisy was murdered in her garage at the end of a Fourth of July barbeque at her family's house.  A few months after her murder, her mother Delilah confessed, was sentenced and died in prison.  There are a few other members that are no longer around and why Carney is re-investigating a solved murder raises more questions than answers.

Readers will LOVE this story and the way that Tish and Reade work together !!  You cannot help but love all the characters and the friendships and relationships.....all but one person, Schuyler, that is !!  But every story, no matter what it is, always has to have a villian or just a nasty person who has to cause some form of drama....but that only makes readers turn the pages faster !!  And when you get to the last page of From Ladle to Grave, Meade will have your blood boiling and longer for the next book to see what is going to happen next !!!