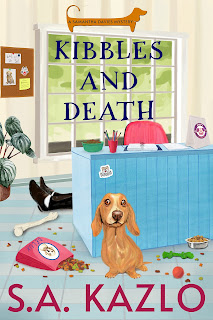 After a nasty divorce, Samantha Davies has finally gotten her life back on track. She enjoys her hobby of hooking—rug hooking, that is—and is fulfilling a lifelong dream by writing her first children’s book, featuring her dachshund, Porkchop. But the pleasant pace of her life in small-town Upstate New York is suddenly shattered when she finds the dead body of the local pet shelter owner—murdered and covered in kibble!While Calvin Perkins wasn't the most beloved man in town, Samantha's shaken to think there's a killer among them. Even more so when her octogenarian neighbor's boyfriend becomes the police's number one suspect and her neighbor pleads with Sam to help him. While Sam's research skills have been honed in her pursuit of a publishing career, she's not convinced she won't be in over her head. Calvin may have been great with the animals, but he wasn’t well-liked by people, creating a list of suspects almost as long as Porkchop's favorite bone. But with the help of her Southern belle cousin, Candie Parker, Sam vows to find the truth...even if she has to go toe-to-toe with the handsome new detective in town to do it. Old grudges, new secrets, and danger around every corner means Samantha better find the killer's identity quickly...before they set their sights on another victim!  (Summary via Goodreads)

You are going to fall in love with Kibbles and Death, the first book in the Samantha Davies Mystery series by S.A. Kazlo !!  You will want main character Samantha Davies and her cousin Candie as your new best friends !!
In Kibbles and Death Samantha goes to For Pet's Sake, the local pet shelter to drop off a bag of dog food that her dog, Porkchop doesn't like.  She is donating it to the shelter but has to deal with the owner, Calvin Perkins, who is not nice....to humans that is.  When Sam and Porkchop get to the shelter and see that the door is open, they never think to be alarmed, not in Wings Falls.  Unfortunately when they go inside, they soon find out why the door is open and Calvin didn't leave it open for Sam. Whoever clobbered Calvin in the head left the door open when they hastily left the shelter.....and Calvin dead on the floor.
After dealing with Sergeant Joe "Sandy" Peters at the scene, Sam thinks it cannot get any worse.  Joe has had it out for Sam ever since she gave him the nickname Sandy in grade school and he still holds it against her.  But Sam soon learns that things can only get worse when she meets the new detective in town.  Detective Hank Johnson is trouble in a different way when Sam meets him and develops an instant crush !!
Sam needs to stay far away from both Joe and Hank but finds herself in the middle of the investigation when her neighbor, Gladys, asks her to look into Calvin's death when her boyfriend Frank is put on the police's radar.  Sam, along with Candie as her sidekick, decides to look into the murder to clear herself and Frank from the suspect list.  Unfortunately as they dig, the list of suspects grows instead and they have no idea how to clear everyone......
Readers will fall in love with this book as soon as they open it up.  You will love the characters and the little town of Wings Falls.  The only dark cloud over the town is Calvin's murder so if they can solve it, there will be sunny, cloudless days for days to come.....sadly the killer wants to stay hidden under that dark cloud and will do whatever it takes to stay there.
Review by Missi M.