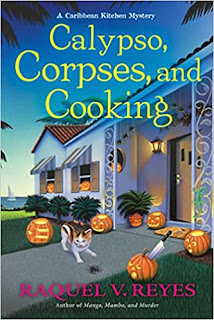 It’s time for a savory soirée—but something sinister is stewing—in Raquel V. Reyes’s second delightful Caribbean Kitchen mystery, perfectly delicious for fans of Mia P. Manansala.Fall festivities are underway in Coral Shores, Miami. Cuban-American cooking show star Miriam Quiñones-Smith wakes up to find a corpse in her front yard. The body by the fake tombstone is the woman that was kicked out of the school’s Fall Festival the day before.Miriam’s luck does not improve. Her passive-aggressive mother-in-law puts her in charge of the Women’s Club annual gala. But this year, it’s not canapes and waltzes. Miriam and her girlfriends-squad opt for fun and flavor. They want to spice it up with Caribbean food trucks and a calypso band. While making plans at the country club, they hear a volatile argument between the new head chef and the club’s manager. Not long after, the chef swan dives to his death at the bottom of the grand staircase.Was it an accident? Or was it Beverly, the sous chef, who is furious after being passed over for the job? Or maybe it was his ex-girlfriend, Anastasia?Add two possible poisonings to the mix and Miriam is worried the food truck fun is going to be a major crash. As the clock ticks down and the body count goes up, Miriam’s life is put in jeopardy. Will she connect the dots or die in the deep freeze? Foodies and mystery lovers alike will savor the denouement as the truth is laid bare in this simmering stew of rage, retribution, and murder.  (Summary via Goodreads)

Calypso, Corpses, and Cooking is the second book in the Caribbean Kitchen Mystery series by Raquel V. Reyes.....and it will make you hungry while you read it !!

In Calypso, Corpses, and Cooking Coral Springs, Miami is getting ready for Halloween !!  Main character Miriam and her husband, Robert, have decorated their front lawn for their son, Manny, as well as their neighborhood but what they don't expect is to find Lois Pimpkin knocked out in front of one of their tombstones.  This starts Miriam down a long, twisty and frightening road that has nothing to do with ghosts and goblins !!

It seems like things coudn't get any worse but then Robert's mother, Marjory, puts Miriam in charge of the annual gala for the Women's Club hoping to get the younger crowd interested.  So Miriam gets her friends and family involved so that they can make sure the event is a huge success !!  Unfortunately when another person ends up getting killed, all Miriam can focus on is solving the murder......but she never expects the case to get as close as it does when her neighbor ends up in the hospital and her with his dog.

Calypso, Corpses, and Cooking will have readers turning the pages as quickly as possible to stay on top of things.....if you have already read the first book in this series, Mango, Mambo, and Murder, you will be at an advantage as Reyes talks about the murder, case and people from that book.

I really enjoyed the storyline and the characters of this book.  However, Reyes does include Spanish throughout the book, sometimes translating but most often not.  Luckily (I hope) what doesn't get translated is not important to the story...if it was, it was lost on me.