Steeped in Secrets (A Crystals & CuriosiTEAS Mystery #1) by Lauren Elliott 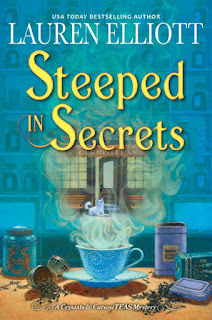 Flat broke and divorced, intuitive gemologist Shay Myers has changed since leaving her artsy hometown of coastal Bray Harbor sixteen years ago. But when she moves back under strange circumstances, old instincts may be the only key to spilling the tea on a deadly mystery.Even with her life in ruins in New Mexico, Shay feels uneasy about settling into the small seaside town where she grew up on California’s Monterey Peninsula and taking over an estate bequeathed to her by Bridget Early, a woman she had barely known. Her heightened senses—an empathic gift she’s had since childhood—go into overdrive upon touring Crystals & CuriosiTEAS, Bridget’s eclectic tea and psychic shop brimming with Irish lore and Celtic symbols. They reach a boiling point when Shay looks up to discover a stranger’s body sprawled across the shop’s greenhouse roof . . .With her new business a crime scene and questions brewing over Bridget’s so-called accidental death, Shay fears she’s also inherited the attention of a killer. The terrifying realization sets her on an impractical investigation for answers aided by her sister, an elusive pure-white German Shepherd, a strikingly handsome pub owner who speaks in a gentle brogue, and a misunderstood young woman with perceptive talents of her own. As Shay struggles to figure out her true purpose in Bray Harbor and the powerful connection she has with the tea shop, she must trust her judgment above all else to identify a ruthless murderer and save herself from becoming victim number three.  (Summary via Goodreads)

Steeped in Secrets by Lauren Elliott will be hard to put down.  This is the firstbook in her new A Crystals & CuriosiTEAS Mystery series and it is an amazing first book !!!  The title perfectly describes the biggest aspect of this series.....SECRETS !!

In Steeped in Secrets readers are introduced to Shayleigh Myers who is moving back to her hometown of Bray Harbor after she finds out her husband has cheated on her in their marriage and their business and left her penniless.  Then she finds out that she has inherited an old tea and psychic business as well as a cottage on the beach.  But she isn't sure that she wants any of it when she is doing the first walk through and they find a dead body on the glass roof of the tea shop.

As Shay digs into why Bridget Early left her the shop and cottage, she cannot help but think there is more to things.  And add the dead body on the roof.  The police identify the dead man as a private investigator from Ireland and he was in Bray Harbor to warn Shay......but Shay has no idea what he could have wanted to warn her from.

As Shay decides what to do with the tea shop she cannot stop thinking about everything !!  And now she has her friend's niece, Tassi, who knew Bridget quite well telling her that she can do the tea readings and everything that Bridget did with research and time.  But does Shay want to go down that path ? Is she even capable of that ??

Steeped in Secrets is a story FULL of SECRETS and readers will LOVE everything about this story.  This is the beginning of a great new series that readers will want more and more of.  There is so much to love within this book and as you read and get to know the people and Bray Harbor you will want to move there and be a part of it all.