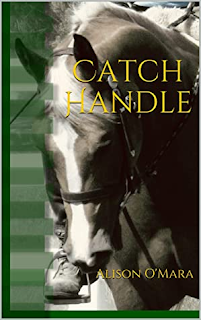 Arabian horses are admired for their strength, grace, and athleticism. They are beautiful, intelligent, and remarkable animals. As a newly minted veterinarian, Vivian Anderson knows and loves horses better than most. With an important horse show on the line and the search for a full-time vet job fast-approaching, Vivian is fully occupied at her Aunt’s Arabian horse ranch and her equine medical externship. Vivian’s world is abruptly shaken by a shocking murder that casts suspicion on the people she thought she knew best. Stolen medications, fatal “accidents,” unsavory horse handling, and a handsome newcomer have Vivian reeling. She cannot shake the feeling that the seemingly random events are all part of the same puzzle, but who can she trust? Vivian is about to learn just how dangerous her world of horses can be.  (Summary via Goodreads)

You have got to be kidding me !!  Why ? Why ? Why ? That is the question you will be asking when you finish reading Catch Handle by Alison O'Mara. Why would she do that to us readers ?

Catch Handle is a cozy mystery that will have readers shocked at the ending !!  Your mind will be completely blown !!

In Catch Handle Vivian Anderson lives with her aunt Abby who runs a horse ranch and Vivian is starting her new full-time job as a large animal veterinarian.  Vivian works with David at his veterinary clinic and they do a lot of house calls to take care of local animals.  Vivian and Abby are participating in a horse show and that's where everything starts.....

Vivian is staying on the grounds during the weekend of the show so that she is there during the night to check in on the horses if the need arises.  Unfortunately during the second night Vivian's dog, Mutt wakes her up and insists on going for a walk and on that walk she comes across the body of Zepner.  Zepner is the hired help for a local ranch where the owner, Pamela, is horrible !!  Also Zepner has been know to cheat at the shows.  Of course there is a long list of likely candidates that wouldn't cry over Zepner's death but Vivian still doesn't like to think that someone close to them could have done the deed.

Vivian has her hands full with her job, helping her aunt at the ranch and she is dating two guys.  Colin she has known pretty much her entire life and he is trying to take their relationship out of the friendship zone while Nate is the step-son of one of the other local ranches and is a lawyer and he would like to get to know Vivian better.  Vivian takes to dating both of them which as we read, we see that she has a lot of difficulty managing that.....but she sure sounds like she's having fun with it !!

Vivian cannot stop her brain from seeing Zepner's body and trying to find out who killed him and why.  And then when someone else is found dead, her brain kicks into overdrive.....

Readers will be SHOCKED when the murderer is revealed !!  There is no way to have seen that coming, this person would not have been on our radar.  And we know that Vivian would not have suspected this person either !!  Readers will love the storyline and the relationships among everyone.  O'Mara knows how to write the story allowing the readers imagination to open up and readers will feel like there are right there next to Vivian throughout the story.  And when you get to a certain part in the book, you will have to keep reading until you get to the end..... I know I had to know the end !!